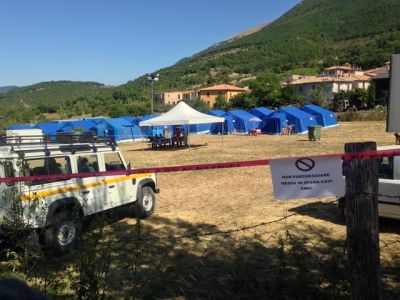 On the last Sunday in August, Pino and I put on helmets, mounted his moto Guzzi and headed southeast into the mountainous Valnerina (Nera River Valley) towards Norcia, only about 16 kms. from Accumoli (the epicenter of the August 24 earthquake).

We had to take a detour to Norcia due to falling boulders on the road after a recent aftershock. Our detour route took us along a winding road, climbing up forested mountain gorges through breathtaking scenery, up past Preci, on to Visso, then to Norcia.

We stopped in Norcia for espresso, parking the motorcycle outside the medieval walls, crumbling in sections, cordoned off. Fire department ladders were being raised to the top of a city medieval entrance, like a groping long arm. We wandered the medieval alleyways, nearly empty now; tourists have fled. All churches closed, each one wounded by the earthquake, silent, awaiting assessment by engineers.

From Norcia, we headed towards Ascoli Piceno, doubting the road would be open. It was closed – as was the road to Castelluccio di Norcia, a gem of a medieval hill town overlooking the Piano Grande (Great Plain). Earthquake damage there, too.

We turned back at the sign indicating roads closed, took a side road flanking the mountain toward San Pellegrino.

We had never explored this tiny medieval town.
We won’t be able to do so for quite a while.
Fire trucks at the entrance of the village were the clue. We soon discovered that San Pellegrino (population 1,000 in summertime, far fewer in the winters) is the only zona rossa town in Umbria. It was cordoned off, entry only possible to residents with hardhats accompanied by hard-hatted vigile del fuoco (“firemen”).

This entire medieval village crumbled and all residents are now either in the tent camp near the village or living elsewhere (many in nearby Norcia) with friends or relatives. Even before I took off my helmet, I connected with elderly Maria, 87, in her own “helmet” (hard hat), about to head up to her house with her vigile escort, “to get some things I need, to feed my chickens…but I live in a tent now…” They soon passed under the red-and-white-striped cordons and headed up towards the rubble.

At a picnic table nearby, Pino and I talked to Anna Maria, her mamma, Anna, and grandparents, Paolo and Patrizia, now living in the nearby tent camp, too. Carabinieri volunteers are at the entrance to the camp, assuring entrance only to the villagers, but they happily took me on a “tour” when they knew I’d be writing notes to bring in aid to the “new homeless.”

Other volunteers from various groups were busy on an array of tasks, each eager to aid the “new homeless,” physically and mentally: “we have to help distract them,” volunteer Marcello told me as he planted flowers. “These colorful flowers line the way to the tents; we brought them down from devastated balconies in the village. The villagers pass, they note, they stop to water the plants: a task for them.”

It was near lunchtime and a cheery group of volunteers chatted as they peeled potatoes outside the camp kitchen. A rich tomato sauce with meat was bubbling in huge pots nearby on a camp stove. One of the potato-peelers promised to send me bank information for San Pellegrino restoration. When he does, I’ll post it on my site, annesitaly.com.

May the “new homeless” of San Pellegrino soon return home.

View the embedded image gallery online at:
https://www.lagazzettaitaliana.com/region-of-italy/8182-in-san-pellegrino-di-norcia-the-earthquake-s-new-homeless#sigProIdeebfe6b5cc
Tweet
More in this category: « Vatican City Must-See Art in the Vatican »