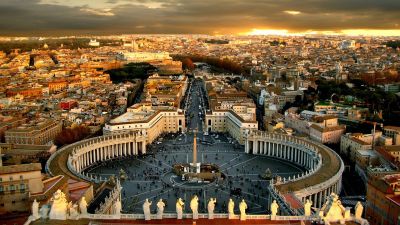 Vatican City is a walled enclave within the city of Rome. As the smallest state in the world (it’s officially known as Vatican City State or the State of the Vatican), it is currently ruled by Pope Francis, the 266th Pope of the Roman Catholic Church. Vatican City is home to a trove of iconic art and architecture and religious and cultural sites housing some of the world’s most famous paintings and sculptures. Its unique economy is financially supported by the sale of postage stamps and tourist mementos, fees for admissions to museums and the sale of publications.

Vatican... DID YOU KNOW?

The Vatican City has the highest consumption of wine per capita. An average resident of the city state consumes an impressive 54.26 liters a year. This is most probably attributed to the facts that its residents are older and tend to eat together in large groups and the consumption of Communion wine is a standard practice for a large number of them.

View the embedded image gallery online at:
https://www.lagazzettaitaliana.com/region-of-italy/8176-vatican-city#sigProId0402a96cab
Tweet
More in this category: « Church and Science: Together Reaching for the Stars In San Pellegrino di Norcia, the Earthquake’s “New Homeless” »