Church and Science: Together Reaching for the Stars 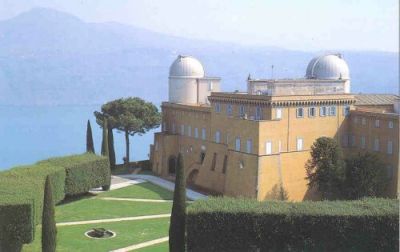 The relationship between the Roman Catholic Church and science is a widely debated subject. Historically, the Church has often been a patron of sciences and science historians credit medieval Catholic mathematicians and philosophers as the founders of modern science. Astronomy, a natural science defined as “the study of celestial objects (such as stars, galaxies, planets, moons, comets, asteroids, and nebulae) and processes (such as supernovae explosions and gamma ray bursts)…and more generally all phenomena that originate outside the atmosphere of the earth” has, traditionally, been a long-standing interest of the Church. This interest is due to the astronomical basis of the calendar by which holy days and Easter are determined. In fact, the Gregorian Calendar (also called the Western Calendar or Christian Calendar) was created from astronomical data. Introduced by Pope Gregory XIII in October 1582, developed by Aloysius Lilius, an Italian doctor, astronomer, philosopher, and chronologist, and later modified by Christopher Clavius, a German Jesuit mathematician and astronomer at the Collegio Romano – a pontifical university located in Rome, Italy – the calendar is the perfect partnership of Church and science. The Gregorian Tower (Tower of the Winds) was built between 1578 and 1580 above the Gallery of Maps which connects the Villa Belvedere with the Apostolic Palace (the official residence of the Pope) in Vatican City to promote the study of astronomy. The Papacy actively supported astronomy and established the Observatory of the Roman College in 1774. The Specola Vaticana (Vatican Observatory) in the Tower of the Winds was established around 1789, later closing down because the dome of St. Peter’s obstructed its view. Its instruments were transferred to the College Observatory which was subsequently moved to the top of the Church of St. Ignatius in Rome.

In 1870, with the capture of Rome, the College Observatory and all of its research and instruments fell into the hands of the Italian government. Eight years later, the Observatory was nationalized by the Italian government ending astronomical research in the Vatican. However, in 1891, Pope Leo XIII issued a motu proprio: Latin for “on his own impulse,” a moto proprio is a document issued by the Pope on his own initiative and personally signed by him. His document re-founded the Specola Vaticana and a new observatory was built on the walls at the edge of the Vatican and remained there for the next 40 years. By the 1930s, the smoke and glowing skies made it impossible to conduct useful observations in Rome. Pope Pius XI relocated the Observatory to Castel Gandolfo but, by 1961, the Castel experienced the same pollution problems rendering observing the skies difficult. The Observatory then established the Vatican Observatory Research Group.

The VORG is now headquartered in a former convent a mile away from Castel Gandolofo. The majority of its research, however, is actually conducted in the U.S., more specifically at the Mount Graham International Observatory, a division of the Steward Observatory of the University of Arizona in Tucson. Sky conditions in southeastern Arizona are among the best in the world. For this reason, the VORG built and operates its state-of-the-art 1.8 meter Alice P. Lennon Telescope and its Thomas J. Bannan Astrophysics Facility, collectively known as the Vatican Advanced Technology Telescope (VATT) here.

The VATT’s research has provided many notable discoveries within the astronomy field. That is to say, scientists and researchers alike are observing the skies and making discoveries that benefit all of humankind, courtesy of the funding from the Vatican City State.