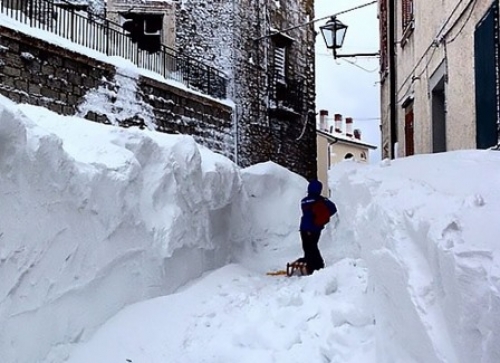 It's official. The data gathered by area enthusiasts is amazing; 101 inches of snow at Capracotta (at 4,662 feet altitude in the province of Isernia), and 95 inches at Pescocostanzo (at 4,577 feet in the province of L'Aquila). These are the greatest snowfalls ever recorded in the span of 24 hours. In reality, all of this snow fell during an18 hour period on March 5, 2015.

The news was published on March 8, via the Online Journal of Weather and Science www.meteoweb.eu. "The previous 24-hour world record for the greatest snowfall ever occurred at Silver Lake, Colorado, between April 20 and April 21,1921, when 76 inches fell." Let's keep in mind that this particular Apennine mountain zone between Abruzzo and Molise is no stranger to snowfalls of this type. Over the years, many similar weather events have been recorded. For generations, meteorologists have considered the area as the snowiest in the world when it comes to short-time precipitation, all of which is tied to the effects of being close to the sea, of having a northeast exposure, and of experiencing other mountain related conditions.

The heavy snowfall was followed by official weather centers and local and international press. amicidicapracotta.com

Tweet
More in this category: « Altopiano dei sette comuni - Between Tradition and Immigration The Giant is Still Sleeping »