All Roads Lead to Rome's Colosseum 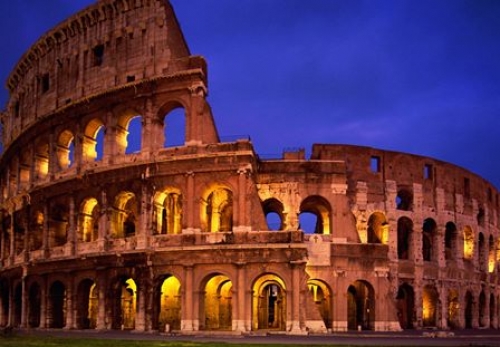 If the walls of Rome's great Colosseum could talk, imagine what tales they would tell of its beginning in 72 A.D. by Emperor Vespasian, and eight years later, its dedication by his son, Titus. A symbol of the greatness of Rome, the Colosseum served as the venue for 100-day inauguration attractions including blood baths of gladiator fights, mock naval battles, public executions and mass slaughters of wild animals. During these extended Roman holidays, a noisy seated gallery of up to 60,000, without conscience, would cheer, laugh and give thumbs-up or thumbs-down signals as man and beast battled to death on the bloodied sands of the ground floor of the arena.

Two millennia later, this most imposing, decaying theater of death, towering 157 feet in the air, is taking a bath of other sorts. Long-time director, Rossella Rea, has scheduled events over the next two years that will complete the Colosseum's first overall cleaning in history. The face-lift and restoration began last October, and when concluded in 2016, will cost $35 million.

Hundreds of jets of water, hidden by scaffolding, spray down each section of discolored, polluted travertine limestone, tufa and brick. In between spraying, workers with bristled brushes hand-clean debris that has proven resistant to power washing. When necessary, restorers use hammers and chisels, returning the refurbished limestone to its original splendor of white and yellow ivory. Visitors this summer will view the first five of 80 arcades that have been restored to their vibrant glory of centuries ago.

A bonus in the overall cleanup and restoration has been the discovery of ancient frescoes, graffiti, inscriptions and drawings in the arcades. Archaeologists are also getting an up-close look at how the Romans built each section and made repairs to the structure that has stood for 20 centuries. Also planned is a review of the underground lifts, hoists and cages that lifted man and beast to the ground floor. An abandoned tunnel was discovered, once used by the emperor upon arriving at the Colosseum, and it's filled with ancient artifacts.

When this stupendous Roman innovation of Ionic, Doric and Corinthian design is finally restored to its previous classic spectacle, the thin ghosts of emperors, senators, slaves, saints and vestals summoned back from the dead will inhabit the tunnel, ground floor, walls and arcades for the next 2000 years. It was a medieval monk who offered the prophetic utterance, "Rome will exist only as long as the Colosseum." A modern prophet also said "It will last another 2000 years if one takes care of it." The Colosseum remains one of the world's most celebrated buildings.

More in this category: « Springtime in Tuscany Some of Italy's Most Popular Churches for Weddings »