The hidden jewels of Sicily 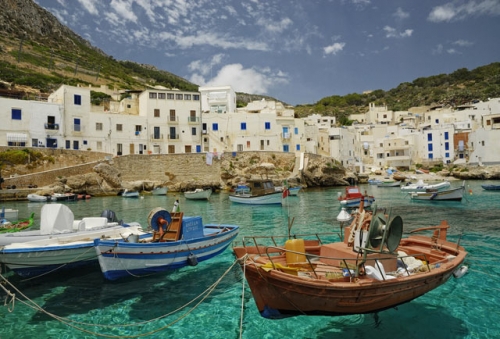 When you think of the southern jewel of Sicily, thoughts of ceramics, citrus plants, arancini, white sandy beaches and pasta alla norma immediately come to mind. What you probably don't think of are the series of satellite islands that surround the triangular-shaped island. Off the northern coast of Sicily at the port of Milazzo are the more popular Aeolian Islands, made up of Panarea, Lipari, Stromboli, Vulcano, Filicudi, Alicudi and Salina. To the west are the lesser known Egadi islands made up of Favignana, Marettimo and Levanzo off the coast of Marsala and Trapani. Finally, off the southern coast, closer to Tunisia are the islands of Lampedusa and Pantelleria. These islands are still rather untouched by commercialism and tourism--in a good way, and offer a raw, savage beauty. During the high-season these islands are populated by Italians and VIP who want to escape the typical tourist spots and paparazzi. Read on to find out what these exotic islands have in store for the traveler looking to get away from it all.

According to Greek mythology, the islands got their name from the Greek god of the winds, Aeolus, who dwelled between the islands. Legend has it the sirens sang to Ulysses from the Aeolian Islands. Not surprising. Stunning cobalt-colored sea, windswept mountains and exotic landscape go some way to explaining why the Aeolians (Isole Eolie) are the European Holy Grail for island-lovers. The seven islands of Lipari, Vulcano, Salina, Panarea, Stromboli, Alicudi and Filicudi are a volcanic archipelago and lie between the smoking stack of Mount Etna and the threatening mass of Vesuvius above Naples. Collectively, the islands exhibit a unique range of volcanic characteristics, which earned them a place on Unesco's World Heritage list in 2000. In fact, the island of Vulcano is a volcano itself, where you can take a dip in natural sulfur bubbling mud baths and then soak in the thermal waters. Like Vesuvius, it is considered an active volcano; however, it does not erupt daily like Stromboli and Etna. Lipari is the largest of the islands and the most inhabited. Stromboli is the most distant and volcanically active. The active volcano spurts out lava and smoke offering a wonderful "firework" display at night. It is also possible to hike up the volcano during the day and at night. Don't be alarmed if you hear the volcano rumble during the day either. Panarea is the tiniest and most exclusive island, while Salina, the second largest of the islands, is famous for its Malvasia dessert wine and tranquility. The wild island of Filicudi has traces of the Bronze Age and Alicudi, the westernmost and furthest from Lipari, is a step back in time (no cars, no hotels). The islands are an area of extraordinary natural beauty offering untouched wildlife, white and black sandy beaches and quaint, quiet, small towns. The islands are easily accessible by boat with daily departures from the ports of Naples, Messina, Milazzo and Palermo. The Aeolian Islands are probably the most popular out of all the Sicilian satellite islands, so high season tends to be rather crowded.

Unlike the Aeolian Islands, the Egadi Islands, off the western coast of Sicily are still rather untouched by tourism. Located closer to mainland Sicily than the Aeolian Islands, the Egadi Islands of Favignana, Levanzo and Marettimo, may appear rather harsh from a distance but as you approach the enchanting islands, you'll find crystalline water in the most gorgeous shades of turquoise and dramatic landscapes. Favignana (the largest and most populated) is the most common base for a trip to the islands, while Levanzo (the smallest) offers quiet solitude, bays and grottoes and Marettimo is by far the most remote with a few overnight accommodations and tourist services. The picturesque fishing islands offer an authentic feel, charm and diversity. In fact, it's not only sun and sand on these islands, on both Favignana and Levanzo, Paleolithic and Neolithic cave paintings can be found. It is also still possible to find isolated bays and coves, deserted mountain paths and a general laid-back lifestyle. The Egadi are also home to the largest tuna fishery in Sicily. The islands are a perfect location to explore marine life scuba diving in the azure waters or soak in the breathtaking panoramas of dramatic limestone plummeting cliffs. The islands are easily reached by boat from the nearby mainland Sicilian cities of Trapani or Marsala.

Officially declared the southern-most point of Italy and closer to Africa (only 70 miles) than Italy, the island of Lampedusa is surrounded by a spectacular seascape of incredible jewel-like colors ranging from transparent-blue to turquoise and emerald-green. The island's landscape is very diverse from a flat limestone platform with dramatic cliffs found at the northern end, to jagged and rugged headlands, small creeks and sandy beaches in the southern end. Lampedusa is a paradise for snorkelers and scuba divers who wish to explore rich and unspoiled sea life filled with corals, sponges and tropical colored fish. Lampedusa is also home to "The Best Beach in the World" according to TripAdvisor. Indeed, the Spiaggia dei Conigli (Rabbit Beach) was crowned number one this year beating the beaches of Turks and Caricos and the Caribbean. The Spiaggia dei Conigli is an unspoiled nature reserve that is only accessible by boat and is one of the few places in the Mediterranean where loggerhead sea turtles go to lay their eggs. The beach was praised for its Caribbean colors, white sand, crystal-clear water and unique setting. On the other hand, the land of Lampedusa is white, dry, and stony; consequently there is no farming on the land, so locals live off of tourism and fishing. The island of Lampedusa is the largest island of the lesser-known Pelagie Islands, made up of the smaller islands of Linosa and Lampione. While Linosa is home to only a few hundred citizens, rocky Lampione is completely uninhabited and, legend has it that, the island was a rock which had fallen from the hands of a cyclops. The Pelagie Islands are part of the province of Agrigento. The easiest way to reach Lampedusa is by plane, although ferry services depart daily from a port near Agrigento.

Lastly, just 43 miles from Tunisia but 58 miles from Sicily is the island of Pantelleria. Known for its famous passito and moscato wines, the green island is commonly referred to as paradise. If you are looking for untamed nature and a rugged, simple, private island life, this is your perfect getaway. And celebrities have caught on, like Giorgio Armani who is known to hang out on the island and park his mega-yacht in the pristine waters during the summer months. Pantelleria is also made up of low-lying vineyards where the juicy zibibbo (Moscato d'Alessandria) grape is grown. The grape was actually introduced onto the island by the Arabs centuries ago and is the only variety of grape cultivated on the island's steep land. Notwithstanding the torrid atmosphere, the zibibbo grapes manage to survive and ripen to perfection. Pantelleria is also synonymous with the cultivation of capers since the rocky coast is an ideal living condition for the small green fruit. The capers of Pantelleria are conserved under sea salt and are officially a designated product. Similar to Puglia's trulli, the typical local houses of Pantelleria are dammusi, built of lava-stone with white-domed roofs dating back to the 10th century A.D. unique and symbolic to the island. The local cuisine consists of eggplant, capers, sun-dried tomatoes, cow-base cheese and of course, seafood. The secluded island is ideal in the spring and early summer months, since August is almost unbearable with the heat off the coast of Africa. Although Pantelleria is reachable with an overnight boat ride departing from Trapani, it is best to reach the island by plane.

All of the islands' remoteness is a big part of what makes them so special. Still untouched by the masses of tourists, the islands of the Sicilian coasts all offer an authentic, cultural and relaxing lifestyle that allows you to forget about the chaotic city life for a bit.