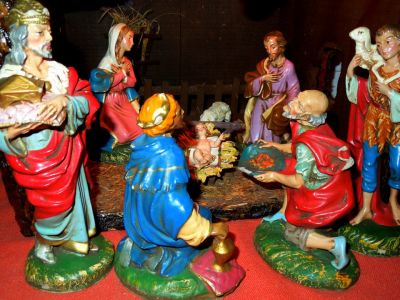 The beginning of a new year is traditionally a major celebration in Italy, as it is all over the world. Families and friends gather for the Cenone di Capodanno which often turns out to be an enormous culinary marathon. Most menus vary depending on the region, with the classic lenticchie e cotechino always present as a symbol of success and good fortune for the upcoming year. “Anno nuovo, vita nuova” often meant that all things old could be discarded to make space for the new, but, fortunately, the old habit of literally tossing unwanted items out the window has finally subsided in most towns and villages!

The presepe (figs. 1,2) is most often considered the true symbol of the Christmas Holidays, more so than the Christmas tree. Certain towns and villages set up a live Nativity with villagers usually competing for a role. The celebrations are not over until the Epifania arrives. Italian children traditionally expect their gifts not from Babbo Natale on December 25, but rather from la Befana on January 6, as I seem to remember from my days growing up in Italy, although I suspect that today some of this might have changed under the pressure of the ever present commercialization of all holidays. A presepe often being passed down within families and constantly updated with new figures is always treasured and admired by all. The Neapolitan productions (figs. 3,4) have been particularly well-known over the centuries. I have seen newer creations as well (figs. 5,6,7), still preserving the symbolism and the simple beauty of the more traditional settings. Two of the most unusual presepe I have ever seen were the one set up on a float 30 feet off the shores on Lake Bracciano (fig. 8) and the other in a bridal store window display (fig. 9) next to elegantly dressed bride and groom mannequins. As you receive and read our first issue of the New Year, the festive lights (fig. 10) will finally be turned off throughout big and small Italian cities, with everyone's heart hopefully filled with joy and hope of a better future yet to come.

Auguri di Buon Anno to you!