The Life of Perry Como 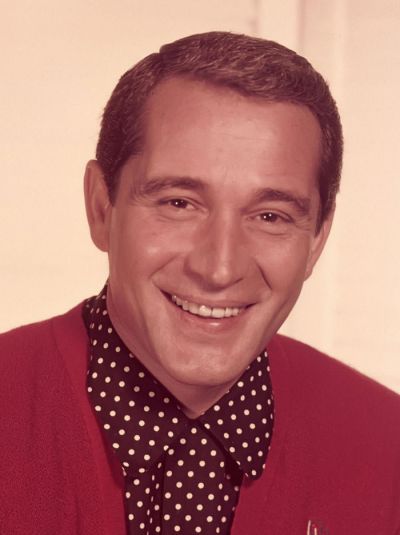 An excellent Italian American crooner and television personality, Perry Como was one of the most successful and popular entertainers of all time. Como was the seventh of 13 children born to his Italian immigrant parents, Pietro and Lucia Como, who came from the region of Abruzzo.

Born Pierino Como in 1913 in Canonsburg, PA, he fell in love with music at an early age after hearing Italian tenor Enrico Caruso for the first time. Even though he loved music, his childhood dream was to become a barber.

At age 11, young Perry helped his family out by working after school in Steve Fragapane's barbershop for 50 cents a week. He swept the floor and learned how to cut hair. At age 13, he got his own chair in the barbershop. He would stand on a box to give haircuts to customers. By 1928, young Perry operated his own barbershop after a customer of his

asked if he wanted to take over a portion of his large coffee shop. After getting settled in at the new spot, Como become a popular barber in Canonsburg. He often sang while giving customers their haircuts.

The following year, Como met the woman of his dreams, an Italian American beauty named Roselle Bellino, at a picnic on Chartiers Creek that attracted many residents from the Canonsburg area.

In early 1933, some of his pals asked him if he wanted to go to a nightclub in Cleveland to watch a popular band play. He agreed to join them. While there, they danced to the Freddy Carlone Band. When Carlone invited anyone with talent to come on the stage and sing with his band, Como was too frightened to do it at first, but his buddies encouraged him. Carlone was so amazed by Como's performance that he immediately offered him a job singing with the band for $28 per week, much less than what he made as a barber.

On July 31, 1933, the singing barber married Roselle. Just 4 days after their marriage, he became a member of the Freddy Carlone Band and the newly married couple moved to the Cleveland area.

After the Ted Weems Band split up in 1942, Como returned to Canonsburg, expecting to go back to being a barber. While Como was looking for a shop to rent, he received a call from Tommy Rockwell at General Artists Corporation who offered to give Como his own radio show for $100 per week and an RCA Victor recording contract. He jumped on the offer.

Como signed a recording contract with RCA Victor on June 17, 1943. In 1945, Como recorded "Till the End of Time," which became his first number one hit on the pop charts. It was just one of his 17 songs, including "Prisoner of Love", which topped the charts in the U.S. His last number one came after recording "And I Love You So" in 1973. It was a remarkable achievement when you consider the fact that he was 60-years-old when he recorded it. His voice was as smooth at 60 as it was at 30. That is a testament to clean living. No booze, pills or women of the night for Perry Como. He was a family man to emulate until the very end.

Tweet
More in this category: « A Look Back: Easter Traditions Erminia Matticchio »