Yogi Berra and His Famous “Yogisms” 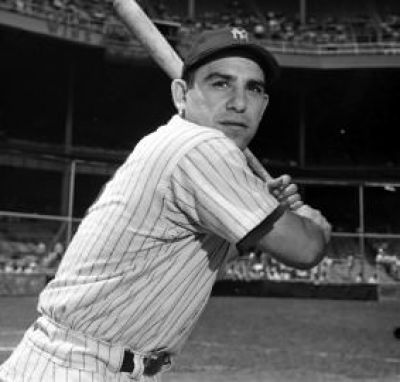 Lawrence Peter “Yogi” Berra was an American professional baseball catcher who later took on the roles of manager and coach. Over time, Yogi Berra emerged as baseball’s unofficial ambassador and one of the game’s most admired representatives. As one who was never fluid on word usage, clarity or understanding when speaking on his experiences, Yogi’s entangled speech made literary history.

While Yogi Berra’s role in the history of American baseball is immeasurable,

his ongoing legacy rests also on his contributions to the American language. His so-called “Yogisms,” those unique and witty observations we have all heard before, are highly recognizable. By making those outrageous, nonsensical statements, Berra unknowingly created a Yogi lexicon, a literary legacy for posterity.

Yogisms are memorable examples of double-talk, stating opposites or stating the obvious, deriving from a first-generation, Italian American war and sports hero who only finished the eighth grade. “In his own way and without intending to, Yogi became a literary figure, a man of language. The simplicity of his style appealed to an American audience already attuned to the pithy maxims of such public figures as Mark Twain, Oliver Wendell Holmes and Dorothy Parker,” states the Yogi Berra Museum.

In time, and with God’s grace on the Berra family, Yogi found his passion for baseball; making his family, friends, the Yankee organization, and a nation proud of his contributions.

Some of Yogi’s most notable Yogisms are:  “It ain’t over til it’s over.” “You can observe a lot by watching.” “You should always go to other people’s funerals; otherwise, they won’t come to yours.”

“It’s déjà vu all over again.” Perhaps his most popular Yogism, Yogi stated this after Mickey Mantle and Roger Maris hit back-to-back home runs during the 1961 season.

“When you see a fork in the road, take it.” While giving directions to his best friend, Joe Garagiola, to his house in Montclair, Yogi told Joe to take the fork. The fork was unique in that no matter which direction you chose, you would end up at Yogi’s house.

“Nobody goes there anymore. It’s too crowded.” Ruggeri’s Restaurant was a hot spot in Yogi’s old neighborhood in St. Louis. While talking with Stan Musial and Joe Garagiola, Yogi came out with this quip about the restaurant.

“Why buy good luggage? You only use it when you travel.” Yogi’s teammates often ribbed him about his luggage. Yogi’s logic was his bags could not get worse, but theirs could.

“We were overwhelming underdogs,” is another Yogism expressed enthusiastically by Yogi to describe the 1969 New York Mets and their amazing performance and comeback that fall. In fact, Yogi was talking to famed pitcher Nolan Ryan at the time, reminiscing about the 1969 Amazing Mets.

While Yogi’s accomplishments in baseball are remarkable, so are his legacy, integrity and long-held values. The walls of the Yogi Berra Museum & Learning Center in Little Falls, NJ share these values that Yogi both espoused and lived by in his great life as one of America’s greatest sports heroes.

Tweet
More in this category: « The Life of Bobby Darin A Look Back: Crooners and Their Songs »