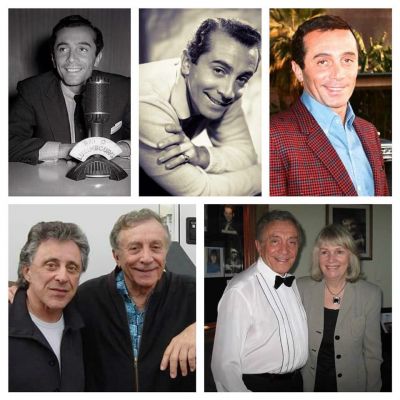 Jasper Cini was born in Philadelphia on Oct. 7, 1927. He grew up in Philadelphia's Italian neighborhood, known as South Philly. His parents were Italian immigrants from the region of Abruzzo. He worked as a bricklayer for his father's construction company as a teenager. Cini really enjoyed singing, practicing for hours every day, wanting to be just like his idols, Al Jolson and Perry Como. The success of a family friend, Alfredo Cocozza, who changed his name to Mario Lanza, encouraged young Jasper Cini to follow his own dream.

Cini served with the U.S. Navy in WWII. He was wounded during the invasion of Iwo Jima. After the war, he started singing in a nightclub and adopted the stage name Al Martino, after Mario Lanza suggested it. Martino was the last name of Cini's maternal grandfather.

In 1948, after singing in Philadelphia's nightclubs for a few years, Martino moved to NYC and continued working wherever he could find bookings. His first big break came in 1952 when he won first prize on Arthur Godfrey's Talent Scouts. He sang a popular Perry Como song on the television show. The success earned Martino a recording contract with BBS, a Philadelphia-based label. There, he recorded "Here in My Heart." The song was a number 1 hit on the U.S. pop charts for 3 weeks in June of 1952. It was also number 1 the UK. The huge success of "Here in My Heart" led to a deal with Capitol Records. "Take My Heart," another hit song by Martino that same year, peaked at number 12 on the pop charts.

Later in 1952, as Martino was gaining success, a mobster showed up at the home of Martino's manager. The mobster said he was going to be Martino's new manager and threatened the life of Martino’s current manager. Martino resisted the arrangement and was later beaten by two mobsters at The 500 Club in Atlantic City. Martino ended up moving to Britain to escape the problem becoming very popular while there.

In 1958, with the help of a family friend who smoothed things out with the mob, he returned to the U.S. In 1963, the song "I Love You Because" peaked at number 3 on the pop charts. Other hit songs by Martino included "Mary in the Morning," "Love Is Blue," "Painted, Tainted Rose," "I Love You More and More Every Day," and "Spanish Eyes." A disco version of "Volare" in 1975 also became a hit. It reached number 1 on the Italian and Flemish charts and number 33 on the U.S. pop charts.

Despite an extremely popular recording career, Martino is mostly remembered for his role as singer Johnny Fontane in Francis Ford Coppola's 1972 film “The Godfather.” The character was loosely based on Frank Sinatra. Martino and Sinatra were friends until Sinatra heard that the crooner in “The Godfather” was about him. Consequently, Sinatra held a grudge against Martino and had him banned from appearing in Las Vegas until 1991.

This Italian American bricklayer, war hero and wonderful crooner passed away in Springfield, PA on Oct. 13, 2009, only six days after his 82nd birthday. He is buried at Holy Cross Cemetery in Culver City, CA.

Tweet
More in this category: « Life in Lockdown A Look Back: My Love Affair with Sicily »