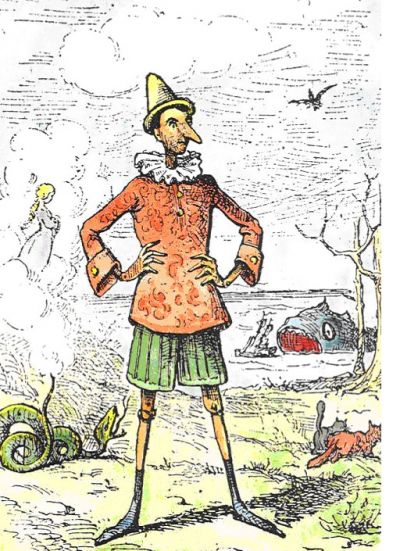 Folk and fairy tales filled with allegorical symbolism were originally shared amongst adults in the oral tradition until Charles Perrault scribed them around 300-years-ago and the Brothers Grimm around 100-years-ago. In 1959, Italo Calvino collected 200 tales for his book “Italian Folktales.” The author, Hans Wilhelm, said fairy tales “are metaphors for the growth of our soul,” and they “reflect our personal journey through life.” J.R.R. Tolkien, father of modern fantasy literature, believed that the human mind has great capabilities to visualize and stories that go beyond the physical world help our minds to transcend the limits placed on us. The stories may be fantastical, but the lessons are invaluable to both children and adults.

It wasn’t until the 19th century that stories were written specifically for children. Perhaps the most famous children’s tale of all time is “The Adventures of Pinocchio” written by Carlo Collodi (Carlo Lorenzini) in 1883. It is the most translated non-religious book in the world and the most widely read, second only to the Bible. It was first translated into English by Mary Alice Murray in 1892.

“Pinocchio” was originally published as a weekly serial from 1881 to 1883 in Giornale dei Bambini. Collodi’s 15th installment in the series had Pinocchio’s feet burned off and death by hanging which horrified the children and the publishers forced him to extend the story and bring Pinocchio back to life through the intervention of the Blue Fairy. He then added chapters 16 to 36.

The characters in this tale are Pinocchio, the protagonist, La Fata Turchina (the Blue Fairy) who represents the “mother” keeping watch and advising him, and Il Grillo Parlante (the Talking Cricket or Jiminy Cricket of the Disney version) who represents his conscience and life guide. Crickets symbolically are carriers of good luck and wisdom.  Pinocchio’s creator, Geppetto, a Tuscan village carpenter, longs to have a son and along with his pet cat, Figaro, and goldfish, Cleo, believes this would bring them great happiness.

Geppetto finds a magical, sentient piece of wood, carves a puppet, calls him Pinocchio, and makes a wish that his puppet could become a real boy. The Blue Fairy will grant his wish on the condition Pinocchio proves himself to be “brave, truthful and unselfish.”

Geppetto sends Pinocchio to school but on his way he encounters many trials and challenges and the tough lessons begin. A cunning fox and cat take advantage of his naivete and he never makes it to school. He is deceived repeatedly and falls prey to the temptations of a world that, to him, appears to be pure fun, lawless and free but turns out to exact a high price in humiliation and disgrace. Not listening to and heeding the wisdom of the cricket (his conscience) Pinocchio kills him, although he reappears at times to try to help Pinocchio who seems to be in constant trouble.

Americans are most familiar with the gentler 1940 Disney movie of the story of Pinocchio. Disney’s moral is if we are brave and truthful and listen to our conscience we will find salvation. Collodi’s much harsher moral is that if we behave badly and don’t obey adults we can be tortured and killed. Pinocchio’s bad behavior and what becomes of him was to serve as a warning that bad things happen to bad people.

Both versions show Pinocchio undergoing tests of faith and character when faced with the trials and tribulations of life. They teach us to set goals and pursue them without fear. They show the importance of education which frees us by giving us knowledge, critical thinking and reasoning and that we need to handle responsibilities before we play. Above all, they show the importance of being truthful. Every time Pinocchio told a lie, his nose turned red and grew longer until it became so long he couldn’t turn around. Lying is a defense mechanism but the truth always comes out and as the saying goes, “a lie keeps growing and growing until it’s as clear as the nose on your face!”

When distraught Geppetto searches for Pinocchio and ends up being swallowed by a whale, Pinocchio finally realizes his mistakes and rescues Geppetto. Leaving the belly of the whale represents his liberation and his ability to overcome adversities. It is the classic study of birth-death-rebirth. This fairy tale is a symbolic journey into the underworld where, through metamorphosis, one is born again and emerges whole. When Pinocchio began to make wise decisions, set goals and accomplish good deeds he was finally able to become a real boy.