About the Author: Giuseppe di Lampedusa 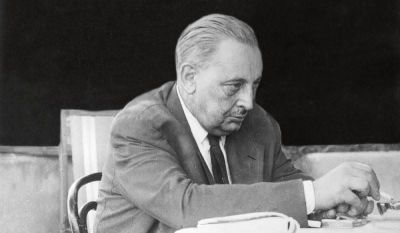 In 1861, Count Klemens von Metternich said that Italy was nothing more than a geographic expression. Indeed, when he said this it was just a year after the Handshake of Teano. One short year could hardly wipe out millennia of campanillisimo, a millennia-long struggle of the Italian people to establish a national identity. In the decades since unification, Italians have wrestled with becoming a single unified people. Although Mussolini nationalism attempted to forge a definition of Italianità, the failures of fascism showed how bankrupt his ideas were. In defeat, Italians asked once again “who are we as a people?” It is this very struggle that makes Giuseppe di Lampedusa's work, “Il Gattopardo” (The Leopard), so important to Italians and Italian Americans.

“The Leopard” is set in the time of the Risorgimento when Giuseppe Garibaldi’s Red Shirts swept through Sicily. The central character, Don Fabrizio Corbera, Prince of Salina, understands that in light of unification’s destruction of the middle class, he must define a strategy to preserve his family’s status. To do so, Fabrizio realizes that his family must adapt to this new world if they are to continue their influence. As the novel so eloquently states, “everything needs to change, so everything can stay the same.” As part of this change, the nephew of the prince breaks off his engagement to Fabrizio’s daughter, Concetta, in favor of a merchant’s daughter who is more useful to the nephew’s political aspirations. The final chapter takes place long after the prince has died, late in the life of his daughter, Concetta, who has lived a bitter life, seething over her rejection. She realizes too late that by not accepting her changes of fortune, she has denied herself a lifetime of happiness.

While authors such as Hemmingway or poets such as Pablo Neruda led lives of adventure, this was hardly the case for Guiseppe di Lampedusa. He led, for the most part, the comfortable life of an Italian aristocrat of that era. He was, however, a man of great intellect whose world view was the nexus of his command of philosophy, politics and literature. He was a voracious reader of English, French and Italian poetry and novels in their original language, as well as histories. While some may view him as the most unlikely of authors to critique Sicilian aristocracy, it is his unique perspective as an aristocrat and intellectual that enabled him to write as could no other author.

Only a man such as Guiseppe di Lampedusa could have written a work such as “The Leopard.” It has been asked if the book was “really a historical novel or was it a psychological novel or a meditation on death dressed up as a historical novel.” Asking this question misses Lampadusa’s view that history and literature are inseparable. His understanding of not just history, but philosophy and politics, gave his work a more holistic view of events. In this unique work, he depicted the angst of the Risorgimento, he provided a commentary on the search for an Italian identity. Just as Concetta, the prince’s daughter, must embrace change so too must the Italian people. We must learn that “everything needs to change, so everything can stay the same.”

Lampedusa died on July 23, 1957. Prior to his death, he had been trying to get the work published but had received nothing other than rejection. In 1958, after his death, his work was published with a small printing of only 2,000 copies, all of which sold in just a couple of weeks. From that time on “The Leopard” has been recognized as a classic of Italian literature.

It is sad that Lampedusa will never know how loved and important his work is. I wish I could tell him that I am grateful that it is part of my, our, cultural inheritance.