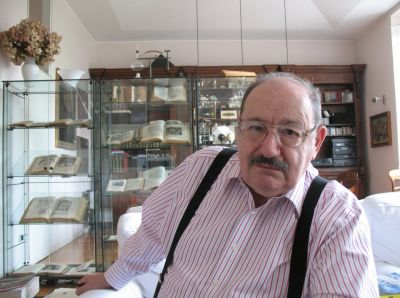 Literature, as is the case with all forms of art, evolves. At times it is more of a revolution than an evolution where the old rules are completely cast aside for more unconventional forms of expression. In the world of literature, we can see this in the works of Faulkner, Calvino and Joyce. Yet, there are revolutions that occur in more subtle ways, authors who advance the art, not with radically different literary structures, but build into their work deeper levels of meaning that do not necessarily appear on the surface. This is the case with one of the all-time great Italian authors, Umberto Eco, whose works extend from children's books such as “The Gnome of Gnu” to non-fiction such as “From the Tree to Labyrinth: Historical Studies on the Sign and Interpretation.” Eco’s fiction includes “Foucault’s Pendulum,” “The Island of the Day Before” and “The Name of the Rose” which was made into a movie.

Before I go much further, for purposes of full disclosure, I should note that for librophiles, such as I, Eco has earned a special place of admiration. He is said to have a personal 30,000-volume library in his apartment in Milan and a 20,000-volume library in his vacation home near Urbino. He is a book lover's author. In his first work of fiction, “The Name of the Rose,” he wrote; “we live for books.”

Umberto Eco has a unique perspective on literature, integrating into his works the concepts of open text and semiotics; concepts he developed in his early writings. An open text approach to literature, opens the work to multiple interpretations by readers rather than one intended interpretation mandated by the author. It is an interpretation of literature that empowers the reader, the consumer, to link meanings between various works of literature, works familiar to the reader, but possibly unknown to the author. He also writes in “The Name of the Rose,” “Thus I rediscovered what writers have always known (and have told us again and again): books always speak of other books, and every story tells a story that has already been told.” Perhaps this is why people who genuinely love literature have such large personal libraries. In such a world you never really finish a book since the next book or perhaps a book you will read a year will give you greater insight into the tome you are about to place on the shelf.

You can see this open text approach in “The Name of the Rose” where Eco employs his degree in medieval philosophy and literature. The book, a murder mystery set in a 14th-century monastery, is great fun with multiple mysteries to solve at multiple levels. Of course, there are the murders themselves. Who is killing the monks in a monastery and why? The book, however, contains many direct or indirect metatextual references to other texts creating other mysteries that must be solved as well to fully understand the work. By metatextual we mean where one literary work is making a critical comment on another. For me, these were the most compelling of the mysteries to be solved. It exemplifies Eco’s view that "books are not meant to be believed, but to be subjected to inquiry. When we consider a book, we mustn't ask ourselves what it says but what it means..."

Do not expect to superficially read Eco. His work is not the stuff of the two-dimensional paperback one half-consciously reads on the beach. When you read Eco, expect to work, that is to say expect to think. He states quite clearly, “entering a novel is like going on a climb in the mountains: you have to learn the rhythm of respiration, acquire the pace; otherwise you stop right away.” I like this metaphor of reading a book, especially when it comes to reading Eco. It can be a climb at times, it can be a challenge to solve the intertextual and semiotic aspects of his work, but this climb is certainly worth the view.

When we achieve the summit, when we have conquered an Eco book, we enjoy expansive views of the world around us that are not available in the foothills.