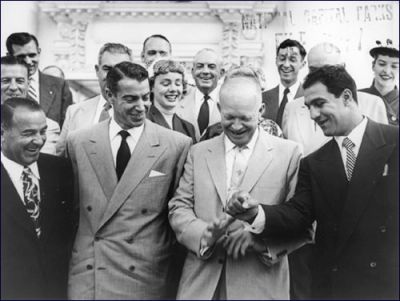 The early 1900s saw America open its doors to immigrants from all parts of Europe and Asia. These pioneering immigrants arrived at New York Harbor, undoubtedly worn out and exhausted, toting an old foot locker and a couple of bags.

What all these immigrants possessed in their hearts was a lifetime opportunity in America to economically improve their family situations. Most arrived in stages, following Papa, who usually came first to establish citizenship and secure gainful employment.

These Italian immigrants were chasing after the “American dream” and the “gold in the streets” they had heard so much of and hoped for when they were growing up and working on the farmlands and vineyards in sunny Italy. Like other immigrant groups, they had sons who honorably served their country in WWII.

Hall of famers Rocky Marciano, Lawrence “Yogi” Berra and Joe DiMaggio, all first-generation Italian Americans, served in the war. Vince Lombardi, the venerable hall of fame NFL coach and a first-generation son, received a waiver because he was married, had an infant son and was a full-time student at Fordham University in NYC.

At first, these first-generation greats obeyed and followed their Italian fathers into the trades, working side-by-side with them until realizing this was not the end game and success they wanted for themselves.

DiMaggio worked with his father, Guiseppe, a successful fisherman for decades, in San Francisco. DiMaggio would do anything to get out of cleaning his father’s boat. The smell nauseated him. Guiseppe called him “lazy” and “good for nothing.” DiMaggio dropped out of high school and instead worked odd jobs, hawking newspapers and working at a warehouse.

Lombardi worked with his father, Enrico, in the butchering and meat distribution business in Brooklyn. Enrico worked tirelessly and Vince followed, knowing full well that hauling 200 lb. slabs of beef into walk-in coolers everyday was not the work he wanted to do for the rest of his life. Of these four great Italian sons, Lombardi was the only one to graduate from high school and college.

Marciano, Berra, DiMaggio, and Lombardi worked those grueling jobs appreciating them while their fathers imparted the intangible qualities that would eventually translate into their great efforts on the playing fields.

Their Italian fathers led the way with exemplary work habits, modeling vocational readiness and applications while always striving for perfection; no shortcuts were ever allowed. “You don’t do things right once in a while. You do them right all the time,” Papa Ernie Lombardi would shout at a young, aspiring Vincent. This was a commonplace mantra articulated in most Italian households during that time.

Outwardly, these fathers were culturally prideful and absolutely detested those accepting handouts, food and generosity from government agencies. As a result, the sons learned all about hard work, toughness, commitment, and perseverance.

These first-generation sons were very special and were encouraged to be trailblazers in competitive, physically-demanding sports like football, baseball, boxing, wrestling, and even weightlifting. They intuitively knew they possessed the physical skills for sports but lacked the academic abilities to go farther in life in the white-collar professions.

Their Italian mothers had a special place in their hearts for their ambitious sons; their motherly care never going unnoticed. They would always find a quiet moment alone with their sons, usually in the kitchen while stirring the tomato sauce for Sunday’s dinner.

Reminding them about the importance of focus and achievement, their mothers would privately and emphatically affirm this mantra: “Poche paraole e fai i fatti, figlio mio.” “Use few words and make it happen, my son.” Culturally, native Italians frowned on bragging and showboating. Therefore, demonstrating humility meant quiet respect for achievement and class as an individual. They were also told, “Vai con chi meglio di tu e fai i spessi” or “befriend those that are better and more accomplished than you and even pay their expenses” to ensure your future successes. Italian cultural, vocational and religious traditions guided their sons’ ambitious footsteps into a hopeful future. Their

old-country values were used to interpret, teach and arm them for success in a progressive and future America.

These Italian sons very much wanted to forge their own distinct identity, helping their families see, experience and benefit from the “American dream.” They succeeded in unimaginable ways for all to appreciate.