A Tribute to Ilio DiPaolo - Wrestler and Community Benefactor 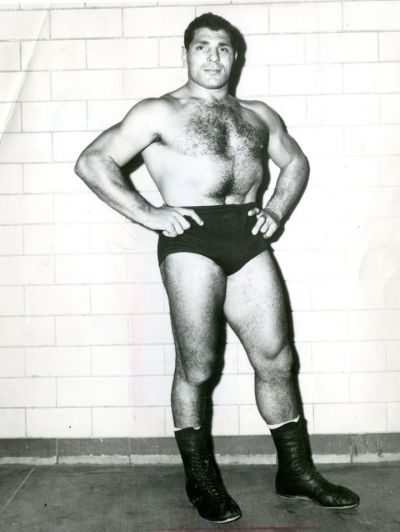 Great athletic achievements are rare, recorded and remembered for the ages in the city's annals for all to reflect, recite and even relive those precious moments and events. How, then, do you accurately measure the greatness of local athletes, long after their days of competition and glory are over? What are your criteria? Is it their exceptional physical abilities, number of competitive wins, individual records, public consensus, or induction into a sports Hall of Fame? Clearly, athletic greatness encompasses all these criteria. What stands alone and sets the greatest ones apart, the best-of-the-best, is what they give back to the community as a civic leader and community benefactor, long after their passing. Purposefully driven as a positive outcome, their civic leadership-in-action, a spiritual quality, is internally activated and somehow it is magically transformed into inspired civic participation, promoting and benefiting community groups and members through their support, generosity and commendable work for charities, scholarships, memorials, and even foundations.

In the history of Buffalo sports, no hall of fame athlete has given back more to the community as a benefactor than professional wrester, Ilio DiPaolo. Born and raised in Abruzzi, Italy and known as Hercules in his small town of Introdacqua, DiPaolo emigrated to Buffalo in 1951, chasing after the "American dream" and the "gold in the streets" he had heard so much of and hoped for when he was growing up and working in the vineyards and farmlands of Introdacqua. It was love at first sight and he married Ethel in 1952.

DiPaolo, a 6'2" and 260 lb. agile strongman, came to Buffalo with a fury, full of confidence and fiercely determined to become a welcomed, professional wrestler from Italy. He had his own doubts, privately, because he realized he and Ethel were poor, challenged and he was uncertain how he would be received by the fans in Buffalo. Much to DiPaolo's heartfelt delight, “When he came to Buffalo, people embraced him and brought young Ilio into their homes. This was something he never forgot,” remembers Dennis DiPaolo, Ilio’s oldest son. “Dad was hugely popular in Buffalo, Toronto and Hamilton, which also had large Italian communities, so he had two other major cities where he could visit and [draw attention] from too.” DiPaolo became a huge wrestling sensation in the Buffalo area, winning the tag team world championship twice among other honors, until an ankle injury forced him to retire in 1965 and focus on starting an Italian restaurant in the Blasdell area. This was a goal and vision young DiPaolo had for himself and his family. He never wanted to be hungry again like he was in Italy during WWII.

The wrestler-turned-community benefactor firmly believed that education, athletics and community involvement were the essential ingredients to success. “He believed in giving back to the community as much as you could. He knew there always had to be an end game and that he couldn’t wrestle forever,” recalls Dennis. In fact, DiPaolo had a special connection with children, especially those with disabilities; they were close to his heart. “When those kids close their eyes, you are their hero. Even though they are in a wheelchair, they know their heroes,” the wrestling giant would explain to the younger Dennis. DiPaolo was sensitive to those children because he, too, had experienced and remarkably overcame polio as a young child in Italy. “He signed autographs before and after matches. He would get dressed and all the people would be waiting outside the locker room…It was one of the ways he gave back to the people,” said Dennis.

DiPaolo was the patriarch of an extended family that included thousands of Western New Yorkers and a long list of Buffalo Bills. DiPaolo’s pleasant demeanor and warm hospitality is what brought people in from all parts of the country. “Even on the busiest nights, Ilio found time to stop at each table to shake hands and say hello, especially if there were children at the table. His son, Dennis, has carried on this tradition,” recalls Tony Giardina of Hamburg and longtime friend of the DiPaolo family. DiPaolo had a special relationship with NFL Hall of Famer Jim Kelly during his playing days with the Buffalo Bills. “My dad was like a second father to Jim. Jim would love listening to my dad about his wrestling matches in the early days,” said Dennis.

After DiPaolo’s unforeseen tragic passing in 1995, friends and family organized a scholarship fund in DiPaolo's named led by Bud Carpenter, Jim Kelly and Randy Ribbeck of the Buffalo Bills. Today the fund has awarded close to $1.2 million in scholarships and donations for the less fortunate in the community. The Ilio DiPaolo Scholarship Fund has been honored by the NYS Section VI Hall of Fame, Buffalo News Prep Hall of Fame, WNY Wrestling Coaches Hall of Fame, and numerous other organizations. DiPaolo's civic leadership produced fruitful community gains for all to appreciate and share in their own lives, establishing himself as the greatest benefactor among all the great athletes in Buffalo’s sports history; he is the gift that keeps giving back to young athletes and charities. That kind of philanthropy is so very special and truly uncommon. DiPaolo’s generosity lives on and continues to be promoted by his two sons, Dennis and Michael, and grandson, Ilio, owners of Ilio DiPaolo’s Restaurant and Banquet Facility in Blasdell.

View the embedded image gallery online at:
https://www.lagazzettaitaliana.com/people/8922-a-tribute-to-ilio-dipaolo-wrestler-and-community-benefactor#sigProId06084332df
Tweet
More in this category: « Anthony "Tony" DiMare With Love, from Italy! »