Remembering Sergio Marchionne, the CEO Who Saved FIAT and Chrysler 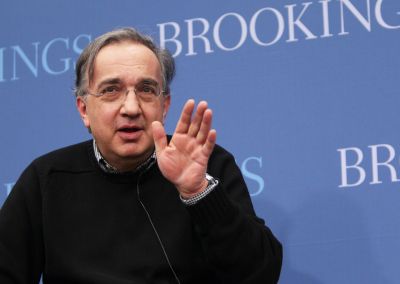 A conversation with Mauro Pino, 2010-11 Toledo plant manager, 2013-’14 VP of NAFTA Manufacturting and VP of LATAM Manufacturing until December 2017, on the shocking death of the charismatic executive.

In the days following the sudden death of Sergio Marchionne on July 25 due to “unexpected complications” while he was recovering from surgery in Switzerland, social media has responded to the tragic news with an outpouring of thoughts and positive comments on the man who will leave an indelible mark on the automotive industry.

“His vision has always tried to look beyond the horizon and imagine how innovation and quality could give greater strength in the future path,” said the President of the Republic Sergio Mattarella. “Marchionne was able to prove all of this with his guidance, showing the world the skills and creativity of the manufacturing reality of our country.” His words were echoed by those of Former Prime Minister Paolo Gentiloni who wrote on Twitter: “Thanks for the work, the effort, the results, and for the Italian pride brought to the world.” In an emotional letter, company president John Elkann hailed Marchionne’s tenure, sought to reassure employees about the future and rally them around newly appointed CEO Mike Manley: “For the last 14 years, first at Fiat then at Chrysler and finally at FCA, Sergio has been the best CEO that anyone could ask for and, to me personally, a true mentor, partner and close friend. This is without a doubt the most difficult letter I’ve ever had to write.”

The story of Sergio Marchionne is what movies are made of: from the horror suffered by his mother’s side of the family as raids conducted by Tito’s soldiers killed Sergio’s grandfather in the sinkholes and Germans shot his uncle after the September 8 armistice to his parents escaping to Chieti in Abruzzo, where he was born, and later emigrating to Canada when he was 13.

His personal and professional triumphs were many. He has widely been recognized for saving Fiat and Chrysler in 2009, and turning FCA Group into one of the fastest growing companies in the auto industry. To find out more about this iconic figure from someone who knew him personally, I reached out to Mauro Pino, 2010-11 Toledo plant manager, 2013-14 VP of NAFTA Manufacturing  and VP of LATAM Manufacturing until December 2017. Mauro is one of a handful of high level executives personally chosen by Marchionne to come to the U.S. from Italy following the 2009 merge to implement FCA “World-Class Manufacturing,” a methodology that aims at eliminating waste while improving quality and safety in a systematic and organized way. Back in April of 2011, Mauro was a panelist at “Italy and the Midwest: Business Perspectives,” an event organized by the Cleveland Council on World Affairs in collaboration with the Consulate of Italy in Detroit, the City of Cleveland and NOIA Foundation to highlight the importance of business connections between Italy and the Midwest.

LG: Mauro, thank you for you time and willingness to share with the readers some personal insight of a man that has so much to do with your professional success in America.
MP: Thanks to La Gazzetta for this conversation. It is a pleasure to speak about someone I so deeply respected and admired for his integrity, unwavering commitment and invaluable leadership. I started working for Sergio and Fiat in 2007 first as the Termini Imerese Plant Manager in Sicily. When he approached me with the proposal to become Plant Manager/Head of Manufacturing of the dilapidated Toledo plant to handle its complete transformation, I had no hesitations whatsoever despite the massive task at hand. I had total faith in his vision for our business. I owe Sergio my career in the U.S. and later in South America. No questions about it.

LG: What was it like working with him and sharing his vision, strategy and practices?
MP: What has always impressed me is that he was a fearless decision maker with an incredible work ethic and integrity. His confidence and acumen were obvious and so was his very direct and frank approach with those surrounding him, which at times could be intimidating. He would not accept unsatisfactory performances or tolerate excuses for under-delivering because he would not accept them of himself. Words like “hopefully, probably and I am sorry but…” better not be in our workplace dictionary! He chose to replace layers of unneeded, unmotivated management with key executives hungry for success. This streamlined approach enabled him to share a more direct view of what the business was doing and for better communication. I was presented with his overall strategy to operate within, but also given the freedom to choose my own tactics to meet expectations and reach the company’s goals. That is quite rare.

LG: What did you find most impressive about Marchionne as a leader?
MP: It may sound like an oxymoron, but he was a true visionary with a crystal-clear path towards success and, often times, out of the box strategies to reach it. Given how he revived Fiat and Chrysler and the short amount of time he did it in against all odds, I find it incredibly impressive that he came to the auto industry as an outsider. He left SGS S.A., a prestigious auditing firm, to head Fiat in 2004 and took over as CEO after Umberto Agnelli died of cancer. The business was near low ebbs and few gave him any chance of success. He cut middle management jobs, reduced wages to help lessen the company’s multi-billion dollar losses and, as a result, proved doubters wrong for the first time. Then, in 2009, he spearheaded the acquisition of Chrysler. There was an obvious leadership problem. Nobody wanted to make hard decisions and he did both at the management and the production level. At the expenses of having a full line of cars (which is what was expected of any automotive powerhouse), he chose to eliminate some slow-selling models that nobody was buying in order to meet customer demand. Once again, he defied gloomy predictions. Today, Fiat Chrysler Automobiles and Ferrari, which was spun off during Sergio’s tenure, are worth nearly 10 times as much as they were when he took over.

LG: What have you had the opportunity to learn from him as a manager?
MP: That the keys for success are effective team work, integrity and lack of self or political interest. Give a lot, expect as much back. He said it himself in a press conference right after taking over Fiat: “The concept of a team is the basis on which I will create the new organization; I promise I will work hard, without polemics and political interests.” He certainly delivered on his words.

LG: Was it hard to work for someone with such high expectations of those around him?
MP: I would say it was incredibly stimulating and rewarding. For sure challenging because the business is so tough, the margin of error is close to zero and because accountability was among Sergio’s enforced concepts.

LG: Do you think it was difficult to be in Sergio’s position? The constant pressure to inspire, deliver, improve, and expand must have been unbelievable.
MP: Sergio believed that leadership is not anarchy; that in a large company those who rule are alone, that collective guilt, shared responsibility does not exist. It starts at the top with the person in charge. It takes teamwork, but in the end, one person is responsible for setting the example, for creating success or causing failure. He taught us this lesson and he lived by it every day.

LG: Marchionne is quoted for having said: “The true value of a leader is not measured by what he has gained during his career but rather by what he has given. It is not what you accomplish today, but the legacy you will leave behind.” Do you agree?
MP: Not only do I agree in theory, but I have espoused this philosophy myself because my years of work with Sergio have taught me that the mark you will make on those around you will outlast any single leader, either for good or bad.

LG: How would you sum up Marchionne’s figure in one word?
MP: That is an easy question, Serena. Simply put: irreplaceable.