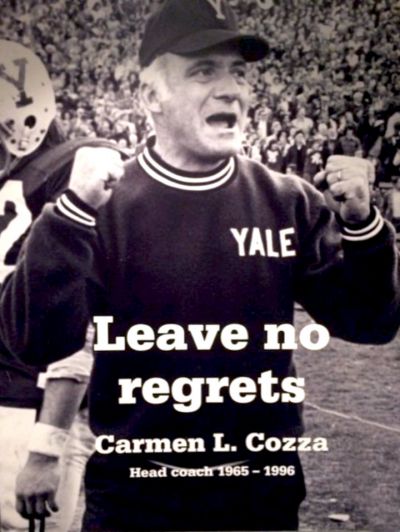 Carmen Louis Cozza, better known as Carm, was born on June 10, 1930 in Parma, OH to Italian American immigrants, James and Carbita, who migrated from Calabria. As a student at Parma Schaff High School, he earned 11 varsity letters in football, basketball, baseball, and track. At Miami University, he won letters in both football and baseball playing football under the tutelage of Ara Parseghian and Woody Hayes. He saw triple duty as a Miami quarterback, running back and defensive back.

This legendary football coach spent 32 years at Yale coaching the Bulldogs and was named “Coach of the Year” seven times by the American Football Coaches Association. From 1974 to 1981 Carm’s Bulldogs won 7 of 8 Ivy League titles. His most celebrated year was 1968 when his team went undefeated. That team was led by two future NFL star running backs, Calvin Hill and quarterback, Brian Dowling. Fifteen of Carm’s players went on to play in the NFL.

Although his final season was in 1996, he still had an office at Yale where he helped hire new coaches and spearheaded a funding project that built the new Yale Bowl.

This modest Italian American passed away in January 2018 and is survived by his devoted wife, Jean, whom he met in second grade. They married after graduating from college and celebrated their 66th anniversary last June. He is also survived by daughters, Karen Cozza, Kathryn Tutino, Kristen Powell, and five grandchildren. Kristen shared some fond memories of growing up with her amazing dad. “He was a loving and supportive dad with a sense of humor who loved teasing his daughters and their husbands. He fondly dubbed his sons-in-law with nicknames.”

Carm’s cousin, Mae De Beneditto and her husband, Al, are members of Italian Sons and Daughters of America University Lodge and are especially proud of their cousin.  Al stated, “Carm was a home-grown Italian boy from Parma, a good Catholic boy who did well. His record is unbelievable.” Rest in Peace, Carm.