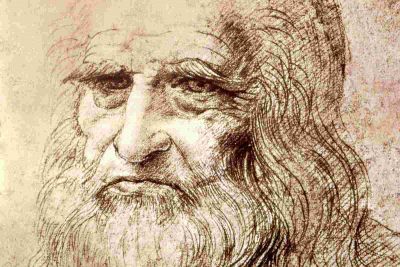 Leonardo, born in a farmhouse near Florence in the village of Anchiano and later raised by grandparents and uncles in Vinci, was a leading artist and intellectual of the Italian Renaissance who had little formal education.

Born out of wedlock to a Florentine notary and a peasant woman, Leonardo schooled in basic reading, writing and math but his artistic talent was evident. At 14 he was an apprentice with noted artist del Verrocchio and established his own workshop six years later. He painted his “Baptism of Christ” at 23 and later his more renowned “Last Supper” (“Il Cenacolo”) and “Mona Lisa.”

This artist, sculptor, engineer, writer, and mathematician began to study anatomy and dissect human and animal bodies during the 1480s. His bone and muscular drawings are among the first on human record. These dissections were so precise they were likened to x-ray quality. Leonardo performed similar examinations on leaves and flowers. Also a student of botany, geology, hydraulics, and aeronautics, Leonardo sketched his observations on pads and loose leaf papers which he arranged in order in themes like human anatomy, architecture, mechanics/inventions, and paintings.

Leonardo did not believe in artistic traditions of the past. He reckoned that following tradition led artists into stagnation. He was a worshipper of new ways of seeing the world, always experimenting.

Leonardo is clearly one of the most diversely talented human beings of all-time.