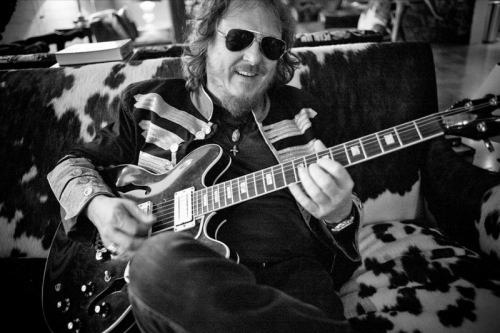 The amazingly talented and humble international superstar returns to Cleveland, on Sunday, October 23rd to the Rock and Roll Hall of Fame and Museum for a special performance at 7:00 PM!

The title of this article may seem to contradict itself. After all, what international superstar, who has sold over 40 million recordings in a career that spans over thirty years, would remain humble? If you said Adelmo Fornaciari,then you guessed right. Better known by his childhood "soprannome" (nickname) of "Zucchero" (Sugar), he has become one of Italy's most beloved and recognizable musical exports.While he is a gifted singer and songwriter,he is equally as talented behind the piano or with a guitar strapped around his neck.

The title of his latest release, "Chocabeck", has a very interesting meaning. It is the provincial Reggio-Emilian dialect version of the Italian word "Schioccabecco"; a term used to describe the sound that a chicken makes when hungry and one that was often used by his father when he was young to euphemistically explain that there was no food to eat. These themes of the human condition and youthful experiences are found throughout the recording. He puts it best by stating that "This album is all about my rootsâ¦.fragments of life and emotions on a typical Sunday from dawn to dusk in the village where I grew up".

To this day, he remains a humble man of the earth as he still tends his garden, growing his own grapes and tomatoes. His friend Sting declared that "Every country produces one singer in each generation who represents that country. For instance, the way Bruce Springsteen represents America or Bono represents Ireland. Zucchero is the "Italian Voice" for everyone in the world". Longtime collaborator and acquaintance, Bono has proclaimed that "My friend Zucchero has had Italy singing and dancing for year. His boyish smile makes him the most charming man in Italy, with a smile that runs all over his face, but the voice is the sound of aged oak, like an oak-aged whisky". Andrea Bocelli proudly professes that "I am very fond of Zucchero because my career is very much connected to his. It was because of one of his songs that I gained the affectionate following that I've had over the years". These are unsolicited and profound words from some very influential people who kindly share their admiration for this talented yet modest man.

The first single from "Chocabeck" was "é un peccato morir" a stirring ballad which takes a nostalgic look at the simple carefree times of days gone by. The next single "Un soffio caldo" was co-written with legendary Italian singer/songwriter Francesco Guccini and is a poignant, lyrical adventure through the beauty of the Italian landscape. His most recent release is the upbeat rocker "Vedo nero" which is a joyous tongue-in-check romp through the confusing adolescent years. Zucchero sums up the themes of Chocabeck by saying that "I've travelled around the world for many years, and it is now more important than ever for me to reconnect with the sights, sounds and feelings of life in a village community. I like to live a simple life with my family, observing the old traditions. This is what my music is all about. It comes from inside my soul."

For more information about Zucchero you can visit his website at . www.zucchero.it.

For more information regarding his special one-time performance in Cleveland you can visit the "Zucchero in Concert" Facebook page or call 216.916.7780!

Tweet
More in this category: « Dr. Fioritto's wisdom in dentistry Giovanni Falcone, a Hero to be Remembered »