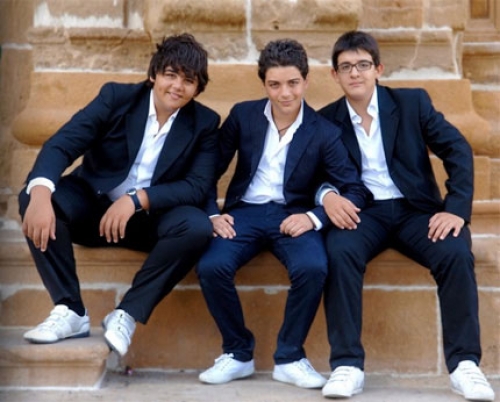 "Volare" means "to fly" and Italian singer Domenico Modugno soared to new heights with his recording and Dean Martin took the lyrics into the âstratosphere' with his rendition. Also skyrocketing to futuristic heights of rhythmical imagination are three Italian young tenors. They are acclaimed as "Il Volo" which means "the flight."

Unbelievable that three teenagers, Piero Barone from Agrigento, Sicily, Ignazio Boschetto from Bologna and Gianluca Ginoble from Abruzzi have so quickly catapulted into a worldwide phenomenon. Two years ago their careers began on television when they won a competition âhands-down' on Italy's popular talent show "Ti lascio una canzone" (I'll Leave You a Song). Like a bolt of lightning, Michele Torpedine who helped launch the musical careers of Zucchero (Sugar) and Andrea Bocelli (Time to Say Goodbye) recognized the talent and together with legendary promoter Tony Renis and American producer Humberto Gatica helped Il Volo launch. There has been no stopping since the trio introduced their first album this past spring, "Il Volo." Their debut album and pop version of "O Sole Mio" have âscorched' the industry leading to a whirlwind of events touring America and television appearances (American Idol, Ellen DeGeneres Show) and most recently the release of their latest album in Spanish and platinum record celebrations back in Italy.

Apart from their singing abilities, engaging humility and incredible busy lives, the teenagers lead normal lives outside of music. In downtime, 16 year-old Gianluca is a major fan of soccer and a World Cup enthusiast. He's also had the opportunity to meet some of the top celebs of the sport. Piero is the oldest of the trio. He's a racing car buff and knows the Ferrari history of tradition and success. Admittedly he's not a roadrunner. He's never climbed into or taken a Formula One for a spin. Ignazio's adoration meshes with IL Volo - the flight. He cherishes airplanes and he looks forward to more flights as the three Italian talented teenagers soar from venue to venue.