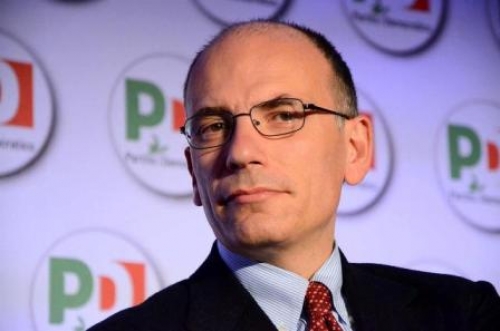 Enrico Letta, 46 years old, husband and father of three is Italy’s new Prime Minister. Born in Pisa, Letta has received training throughout Europe, from his childhood in Strasbourg, where he attended school, to graduating in International Law at the University of Pisa. In Pisa he also obtained a PhD in European Community Law at the Scuola Superiore S. Anna. At 25 he became president of the Giovani del Partito Popolare europeo (the Young People’s Party of Europe).

In 1993 Letta had his first contact with government, by becoming the Chief of the Secretary of the Ministry of Foreign Affairs and later as the General Secretary of the Committee for the Euro in the Treasury. At just 32 he became the Minister for Community Policies. He is by far the youngest minister in the history of the Italian Republic.

In the general elections of 2013, he was the leader of the Democratic Party in the Chamber of Deputies in two regions of Italy, Le Marche and Campania. On April 28, 2013 Letta was elected as Prime Minister with 453 votes in favor, 153 against and 17 did not vote. The result of his election gave confidence not only to the government, but also to the Italian people, who were devastated by the recent political events (Italy had been without a leader since February).

In recent days, Letta has proposed a retreat for his ministers at the Abbey of Spineto (between Florence and Rome), to discuss the crucial issues of the country, especially the taxes imposed on people’s houses and work. He believed it was a great way to reflect and work-out the issues away from the spotlight.

Despite his important commitments Letta continues to be an avid reader of the comic book, Dylan Dog, a huge fan of his favorite soccer team, AC Milan and listens to his favorite singers, Vasco Rossi and Zucchero. In bocca al lupo, President!

At such a young age, Enrico Letta has led a very rich, political career. What most characterize his agenda are his ideas related to promoting young people, investing in them and on their skills. He also argues that only with work a country can exit from the nightmare of impoverishment and to not just to fix economy, but aim at overcoming injustices and bring back dignity and well-being. Without growth, even urgent assistance on which the government has pledged would be insufficient. In bocca al lupo, President!

Tweet
More in this category: « Cast Your Vote - From Italy Museum officials are urging donations to survive and develop »