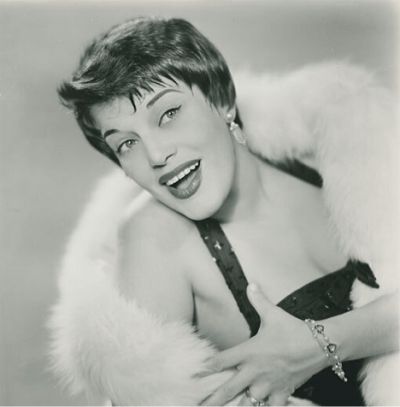 An Italian American author and a famed Italian American performer are to be recognized as two of Cleveland’s notable “Past Masters” in a year-long, citywide celebration organized by Cleveland Arts Prize in collaboration with the Cleveland History Center. Acclaimed novelist Michael DeCapite and singer/actress and comedienne Kaye Ballard (born Catherine Gloria Balotta) were chosen by juries of eminent authorities to be included in a group of extraordinary creative artists from Cleveland who won national attention before the Prize existed. For more information on the Cleveland Arts Prize Past Masters visit www.pastmastersproject.org.

The early death of Michael DeCapite (1915–1958) in a car accident at the age of 42 ended what Fred Gardaphé, the foremost scholar of Italian American literature, says was “proving to be a prominent career as an American novelist.” The New York Times called his first novel “Maria” (1943) “a remarkably well-written book, in a style that is melodiously warm and unmannered.” Michael used his own experiences growing up in the Cleveland neighborhood overlooking the industrial valley now known as Tremont, where he attended Lincoln High School, to illuminate the lives of Italian American immigrants confronting Americanization and assimilation.

While “Maria” is “charged with passion,” said one reviewer, “its rhythm remains collected, even serene, like the skies in early Renaissance paintings.” Though not currently in print, a situation the Arts Prize is seeking help to correct, copies of DeCapite’s three novels can be found, and read, in the Cleveland Public Library’s Special Collections.

Cleveland literary historian Rose Mary Prosen found “DeCapite’s descriptions of Cleveland's Central Market, Little Italy, the South Side, the city, the Flats, the Italian festas, the factory life, the immigrant characters, their conversations, their struggles, their dreams . . . vigorous and moving and controlled. Death and disaster and humor and grace unfold in the pages of a book that makes no moral judgments, that condemns no one, that asks for no pity. ‘Maria’ is a novel of human struggle, of the human condition, perhaps multiplied in its complexity because the characters have transplanted themselves from Abruzzo, Italy, to Cleveland, Ohio, to find that ambition and greed and love and hate and compassion and grace know no national boundaries.”

Michael was the older son of Anthony DeCapite, who emigrated to Cleveland from the village of Rivisondoli in Abruzzo in the early years of the 20th century. That story is memorably recreated by Michael’s younger brother, Raymond DeCapite (who would himself capture the Cleveland Arts Prize) in his 1960 novel “The Coming of Fabrizze.”

As a teenager at Lincoln High School, Michael had taught himself to write by copying out whole passages from the novels of Charles Dickens and Mark Twain in the school library, much in the way his classmates studied the subtle body movements and lightning-fast moves of their favorite pitchers or shortstops. But DeCapite’s attention was focused on other things: how words circled around the secrets of the human heart, capturing tiny things glimpsed in a face or the way an innocent boy took in the cold reassurances of a con man or the unspoken suffering of another.

Kaye Ballard, the boisterous comedienne and singer who appeared in Broadway musicals and nightclubs from New York to Las Vegas and co-starred with Eve Arden in the 1960s TV sitcom “The Mothers-In-Law,” was the Cleveland-born daughter of Lena (née Nacarato) and Vincenzo Balotta, who had both emigrated from Calabria in the south of Italy. While attending high school at West Tech, she sang at service clubs and appeared in a 1941 Cleveland USO show called “Stage Door Canteen.” After graduating, she worked at a burlesque theater, not as a stripper but as straight woman in comedy sketches before taking her act of songs, comedy, and impressions of famous stars on the road.

One night in Detroit, where she was appearing at a nightclub called The Bowery, she was seen by comedy bandleader Spike Jones, who immediately drafted her into his troupe. For two years she toured with Jones, singing, playing the flute and tuba and engaging in the band’s antics. She also sang with the bands of Vaughn Monroe and Stan Kenton.

In 1954 Ballard conquered New York as a madcap Helen of Troy The Golden Apple, with her song “Lazy Afternoon,” a performance one critic called “a wonder of insinuation.” In 1957 she was cast as one of the wicked stepsisters in the live telecast of Rodgers and Hammerstein's “Cinderella,” starring Julie Andrews. She also won critical praise for her role as “The Incomparable Rosalie,” the magician’s assistant and mistress in the 1961 Broadway show “Carnival!” (a musicalized version of the movie Lili), in which she sang “Always, Always You” while stretched out in a box the jealous magician was piercing with swords. During the 1961–63 television seasons, Ballard was a regular on “The Perry Como Show” and Kraft Music Hall.

In 1962 she played Lucy van Pelt on an LP based on the popular comic strip “Peanuts.” Ballard was to be a familiar TV face throughout the Sixties, with frequent appearances on such wildly popular shows as “Rowan & Martin’s Laugh-In,” “The Red Skelton Hour,” “The Mothers in Law,” and “The Patty Duke Show.” A later generation would fall in love with her as “Madam A-Go-Go,” a mysterious fortune teller who appears in the “Fortune Teller” episode of “The Super Mario Bros. Super Show!” In 1995, she was awarded a Golden Palm Star on the Palm Springs Walk of Stars.

“This recognition by her hometown is so well deserved,” says Bill Rudman, host and creator of the nationally syndicated (since 1998) weekly radio program “Footlight Parade” and founding director of The Musical Theatre Project. “Even after her memorable TV career, she remained a legendary figure on Broadway and would perform her highly successful cabaret act to acclaim at the drop of a hat until she was in her 80s.” Ballard lived to the age of 93.