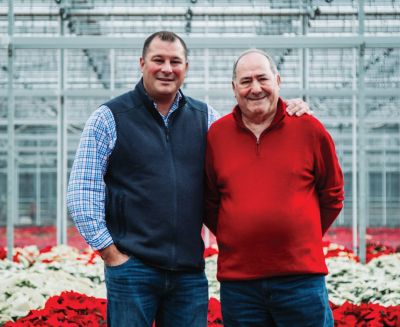 Behind Petitti Garden Centers is a real family and a family of career employees with a passion for plants. Their life’s work is facilitating your personal connection with nature in a way that promotes well-being on every level. It is this dedication that makes it possible to deliver a truly iconic home and garden experience to Northeast Ohio.

Immigrating to the U.S. in 1963, 16-year-old Angelo Petitti never imagined what lay ahead. After completing high school, while living with his mother and uncle, Angelo pursued a Political Science Degree at Kent State University and worked a part-time job as a landscaper. Soon, his passion for plants outweighed his interest in political science, so Angelo traveled to Florida to take on a new endeavor…his own landscape business. A sweltering summer drove him back to Northeast Ohio where Angelo then partnered with his brother, Dominic, to launch Petitti Landscape Company.

Operating the landscape business out of a small garage in Oakwood Village, OH, the Petitti brothers quickly found themselves out of room so they began storing trees and shrubs in the driveway. Passersby began to stop and inquire about purchasing the plants – and Petitti Garden Centers was born.

In the spring of 1971, where the garage once stood, the first official Petitti Garden Center was constructed and this store, located at 24964 Broadway Ave. in Oakwood Village, OH, still serves as the original flagship location today.

In 1975, Angelo married Maria, a young woman who had immigrated in 1966 from the same hometown of Faeto. Maria became active in the business, handling administrative responsibilities such as payroll, receivables and cashiering. In later years, Maria applied her hobby as a photographer for use with in-store signage and the creation of a digital photo book of Petitti-grown plants. Many of Maria’s photos are still found displayed throughout the corporate office.

In 1977, Maria gave birth to the couple’s first child, a son named Angelo G. (AJ), who now serves as President & CEO of Petitti Garden Centers. Daughters Andria and Lisa came into the world in 1978 and 1980, respectively.

A garden center owner for 50 years and a grower for 40, Angelo Petitti has cultivated unique expertise…knowledge that he loves to share through the media. Early in the 1980s, Angelo Petitti started a gardening radio show on Cleveland’s WERE-AM. From 1994-2001, he operated the weekly show on WRMR-AM. The show aired on WDOK-FM from 2001-2011. In 2011, “Gardening with Angelo” moved once again to WTAM 1100, where it currently broadcasts live every Saturday morning from 8 to 9 a.m. and is available on-demand via the free “Gardening with Angelo” podcast powered by iHeart Media. Angelo can also be seen tackling timely gardening topics on WEWS News 5 each Wednesday at noon during “Mark’s Garden” with Cleveland Meteorologist and avid gardener Mark Johnson.

AJ Petitti has also been active in the media since 2003, hosting “Dig This” segments every Wednesday in the 8 a.m. hour of Fox 8 News in the Morning. AJ also appears in and voices a majority of the Petitti commercials aired on TV and radio.