A Cultural Legacy to Italy, The Italian Cultural Garden 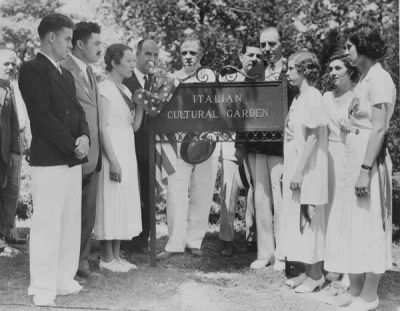 Sometimes a magical moment appears and life gently taps us on the shoulder guiding us to something greater than ourselves. Such a revelation happened upon discovering the great dreams and ambitions of a trio of brave Italian men who came from Italy to America full of anticipation and a burning desire to share Italy’s great cultural patrimony.

These sagacious, valiant men built their careers piece by piece, overcoming the discrimination that greeted them. They were driven by the greatness of who we were and are. And so, in 1930, the Italian Cultural Garden in Rockefeller Park [in Cleveland] was dedicated “as a symbol of the contribution of Italian culture to American democracy.”

Businessman Philip Garbo led this effort. Garbo founded the Italian Fresco and Decorating Company, which produced artwork that graced theaters all over the country. Also instrumental were his friends Basilio Ianni, who became an architect and Alessandro DeMaioribus who rose to be President of Cleveland City Council. They achieved their dream of building a beautiful Renaissance cultural monument to Italy for the public showcasing the glorious cultural patrimony of their beloved Italy.

After returning to Cleveland and studying and living in Italy for 10 years, I met Gino Colage who had lovingly tended this public space for many years. I was deeply moved seeing this beautiful three-acre cultural monument graced by two large Renaissance fountains, one of which is modeled after the fountain in Villa Medici in Rome, and two large sweeping staircases leading to a lower-level amphitheater. They accomplished all of this during the depths of the Depression, and the height of discrimination against Italians.

Meeting the 91-year-old son and 94-year-old daughter of Philip Garbo, I learned the struggles and rejections Garbo endured to fulfill his dream. He spent 10 years, from 1930 – 1940 raising $100,000 to build the Italian Cultural Garden, honoring Italian cultural greats in the Arts & Letters and Arts & Science.

In 2007, the Italian Cultural Garden Foundation was formed beginning a $1.7 million restoration to repair the broken hardscape and infrastructure and complete the original plans for the garden. Upon noticing a large empty quadrant and instinctively knowing something was planned there but never completed, and because all Garbo’s personal papers and intentions for the garden were lost, research was my friend.

From old newspaper microfilm, we now know that a beautiful Pantheon structure was meant for that empty space to honor 100 Italian “men and women,” and are currently raising funds to complete the Pantheon.

In 2012, we dedicated a bronze statue of Dante Alighieri that was also part of the original plan. [In 2020], we completed a 1,300 square foot pavement restoration. In place of the original riverstone, we chose instead to honor seven Italian cultural greats with their images on individual nine-foot black granite medallions: Leonardo da Vinci, Michelangelo, Galileo Galilei, Andrea Palladio, Gian Lorenzo Bernini, Donatello, and Ovidio.

These cultural giants are in good company along with images of Petrarca, Leonardo da Vinci, Michelangelo, Giotto, Marconi, and Giuseppe Verdi, immortalized on the face of the lower-level Renaissance fountain.

It is difficult to explain the mysterious pull that keeps one going when things seem impossible in the face of many obstacles. Many little miracles happened along the way to keep the restoration going, and I often feel Philip Garbo gently encouraging us from Heaven to continue on.

I feel it is an honor and a duty to our ancestral past to continue working for the completion of this cultural monument to Italy, and for the vision of those who struggled and sacrificed to shine the cultural beacon of Italy far and wide.

The Italian Cultural Garden [turned] 90-years-old [in 2020]. It is now enjoyed by the general public, with more than 3,000 attending the annual “Opera in the Italian Garden,” which was brought back to life in honor of the opera concerts given there in the1940’s.

We all can share the pride and vision of these brave Italians who gifted the public with this Renaissance outdoor museum of cultural greats and the brilliant genius Italy gave to the world.

This article first appeared in We the Italians magazine in August 2020.