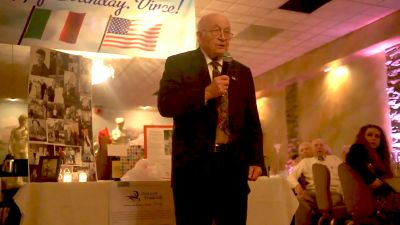 Vincent Francioli was an educator, civic leader, historian, WWII veteran, and a proud Italian American. He passed away at the Cleveland Clinic on October 17. His legacy includes the Fairwood Community Association, the Larchmere Business District, the Republican Veterans Group, and a host of former students and friends, many of whom were Italian Americans who needed help in acclimating to America. His dear wife of 67 years, Evelyn (Tonti), died in 2015. He leaves behind a daughter, Gail, and a son, Mark, many nieces and nephews, and innumerable friends.

Vince was born on Murray Hill Rd. in Little Italy to Frank and Elisa Francioli. They emigrated from the Foggia Province of the Puglia Region, specifically the cities San Severo and Totto Maggiore. He had two older sisters, Phyllis and Mary, and a younger brother, Frankie. His father had a confectionary store on Mayfield Rd. The family then moved to Youngstown where Frank opened The Roma, a restaurant in downtown. When Vince was 12, his older sister Mary died after a carriage accident; his father died soon after from a broken heart.

The family moved again, this time to Collinwood, and Vince graduated from Collinwood High School in 1943.  During WWII, Vince served with the 36th Division, the Texas “T-Patchers,” as a combat engineer, marching through France and Germany and breaking the infamous Siegfried Line. Among his jobs was to de-mine areas, mine them when the Americans left, blow up and build bridges. His Division also opened concentration camps and provided immediate care for prisoners; a task Vince described as seeing “unspeakable tragedy.” In his later years, Vince wrote his memoirs of the war in a book entitled “From Cleveland to Nazi Germany.”

After the war, Vince earned a B.A. from John Carroll University and later an M. A. from Western Reserve University. His professor of education sent him to a large suburban school for an interview. There, Vince was told that the school system was not hiring Italians. Disappointed, he returned to his professor who told him that, not to worry, a Fr. Benedict from Benedictine High School just called and is looking for a history teacher. Since St. Benedict was Italian and the largest Benedictine monastery is Monte Cassino, he assured Vince that he would be welcome. Thus began a 67-year relationship with the Benedictines which included teaching, serving as school board president, chairing the St. Andrew Abbey Benefits, and, with principal Fr. Robert, developing the first Catholic school lay teachers’ retirement plan in the diocese. Vince taught history, government, economics, and contemporary problems, a course he invented. He also moderated the model United Nations team.

When a neighbor was mugged coming home from work in the late 60’s, Vince got about 40 neighbors together in his backyard and formed the Fairwood Community Association, one of the city’s first neighborhood organizations. The goals of the association were to increase safety, help property owners and offer youth positive activities. Later, he chaired the Constitution Committee for the Buckeye Woodland Community Congress and served as a charter and board member. When businesses began to leave the upper Woodland area in the 70’s, Vince got the remaining businesses together to form the Larchmere Business Association. Although not a businessman himself, he served as the group’s first president. He encouraged the businesses to spread the word that there was good rental space on Larchmere and that they should create a new identity for the area.

When he was a young man, Vince befriended fellow Italian and Cuyahoga County Republican Chairman Sonny DeMauribus who encouraged him to get involved in politics. A member of the Republican Executive and Central Committees, he and his wife, Evie, built up the Republican membership of Cleveland’s old Ward 19 (now 6). He served on the campaign committees of Cleveland mayoral candidates Seth Taft, Ralph Perk and George Voinovich, as well as numerable county-wide and judicial candidates. He often brought his friend, congresswoman Frances P. Bolton, to the Italian American Brotherhood Club for dinner. Vince also formed the Cuyahoga County Republican Veterans Association, combining two of his favorite causes.

Later in his career, Vince served as the Director of the Cleveland Civil Service Commission, the CETA Program, the Marketing Division of the Ohio Lottery and Education of the County Youth Services Dept. He was also the Chairman of the Ohio Board of Proprietary Schools, a member of the newly formed Civilian Police Review Board, Il Cenacolo Italiano di Cleveland, and the Italian American Cultural Foundation. He went back to his first passion in his 70’s, teaching, as an instructor in history, the classics and Dante at Cuyahoga Community College. Vince also lectured on the history of Cleveland and led tours of the city, combining his academic knowledge with his real-world experience. He was a member of Our Lady of Mt. Carmel Church on Woodland Ave. and, when it closed, joined Our Lady of Peace Church, where he served on the parish council.

Vince was often the “go-to” man for young Republican candidates who needed some advice and new businesses getting started on Larchmere.

He enjoyed volunteering at Sunbeam School, the Fairhill Center for the Elderly and St. Andrew Abbey. He never turned down a request from an Italian American for help in obtaining citizenship or a veteran for help in getting a job or services. He regularly received visits, calls and letters from his former students, up to his final days. He was the recipient of many honors and awards.

In his spare time, Vince loved to read, garden, paint, and watch old movies. If you came to his house, you would probably receive a zucchini, fig or melanza, a lesson in how to take care of the garden, a story, and a tour of his paintings. He was influenced by the great Italian Renaissance artists. One of his greatest joys was to exchange stories and banter with friends over a pizza at Mama Santa’s in Little Italy, his favorite restaurant.

Vince often said, “It is better to light one candle than to curse the darkness.” Throughout his life, Vince Francioli lit many candles and, in so doing, enabled thousands to find the light.