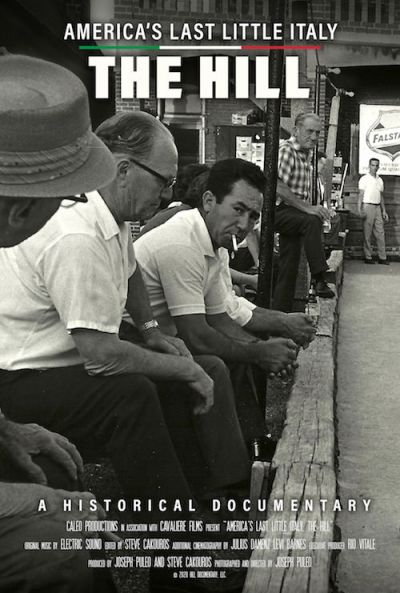 Traveling overseas isn’t in the cards this year. However, I’m still planning a trip to Italy. A trip to America’s last “Little Italy” – The Hill, a neighborhood where Italian can still be heard spoken in the shops and you can smell the intoxicating aromas of prosciutto, basil and fresh-baked bread hanging in the air from its bakeries, eateries and backyard gardens.

The Hill is a rare Italian neighborhood where pride, tradition and culture has been preserved and celebrated, and a destination foodies have embraced for decades. All of these things are wonderful, however, there is more to The Hill than its culinary delights.

“I think The Hill is taken for granted,” said Joe Puleo, the 27-year-old director and producer of “America’s Last Little Italy: The Hill,” a new documentary that debuted as part of the 20th annual St. Louis Filmmakers Showcase. “I think most people just think of its restaurants, and that’s basically it. But there’s so much more. The Hill and its people have a rich history and story.”

Telling that story is what inspired  Puleo to look at The Hill’s past, present and potential future. He wanted to tell the story of the preservation of America’s truly last Italian-American neighborhood, a project that took Puleo on a journey of discovery fueled by his own St. Louis Italian-American roots.

“I have family that live on The Hill. My grandparents live two blocks away from St. Ambrose,” Puleo said. “But I really didn’t know the history of The Hill neighborhood until I got involved in this project.”

Puleo skillfully tells The Hill’s story through historical stills, home movie clips and interviews. The story begins in the late 1800s with the clay mines and brickyards and moves on to The HIll’s establishment of a vibrant self-sustaining neighborhood that has survived depressions, wars, recessions and threats of urban blight – a success story driven by perseverance and pride of both it residents and businesses.

When asked about the title, “America’s Last Little Italy,” Puleo said, “We knew it would get pushback because there is a Little Italy in Boston, Chicago, New York and San Diego. But those places today aren’t much more than a restaurant or two and a thicket shop. Their neighborhoods have been lost, which is what sets The Hill apart. Making it the last true Little Italy are the families that still live there generation after generation, in the homes that their grandfathers or great-grandfathers built. These are houses that continue to be passed down from  generation to generation. You don’t see that anywhere else. Of course, there are the businesses, especially the food businesses like Vopli’s, Missouri Bakery Company, Viviano’s, DiGregorio’s, Urzi’s and restaurants synonymous with The Hill that helped keep the ethnicity of the neighbor.”

As Puleo explained, people didn’t have to leave The Hill because they had everything they needed to live a good life: grocery stores, confectioneries, bakeries, taverns, a barber shop and the church.

Puleo interviewed many Hill restaurant owners, including Charles Gitto, Jr,  who are featured throughout the film.

“This documentary was made by and for the people of St. Louis, and being able to share this film with its intended audience is something we are extremely excited about,” Puleo said. “Although we always envisioned screening this film to a packed house on the big screen, we completely understand the move to online, and are thankful to Cinema St. Louis for prioritizing the safety and well-being of the people that would have come in person to see the films in this year’s festival. Hopefully, this change gives us filmmakers the opportunity to reach more viewers who would rather stream the films online from the comfort of their own home.”

The filmmakers have plans for festival screenings across the country – and potentially Italy – over the upcoming year, hoping to shed light on this historic neighborhood. They will also be pursuing offers from distributors to give their film the opportunity to reach as large an audience as possible for their intended demographic. Updates on future screenings, awards and further information on the film can be found on their Facebook page. It can also be viewed this weekend at the 20th Annual Whitaker St. Louis Filmmakers Showcase. For tickets go to cinemastlouis.org/st-louis-filmmakers-showcase.The showcase will run virtually through July 19.

While viewing the film, I suggest making a dish from The Hill to enjoy. My pick is from Charlie Gitto, Jr., who provided one of his house favorites: Penne Borghese.

Heat oil in a large sauté pan or Dutch oven; add onion, prosciutto and parsley. Cook until onion is translucent, about 2 minutes. Remove the pan from heat; add cognac, scraping the bottom of the pan with a wooden spoon to loosen any brown bits. Return the pan to the heat. Add tomato sauce and cream, stirring until well incorporated; cook to reduce slightly. Add salt and pepper. Add cooked penne; simmer, tossing until pasta is hot and thoroughly coated. Pour onto a platter and serve immediately, garnished with Parmigiano. Makes four servings.

This article first appeared on