The Next Rocco Scotti? 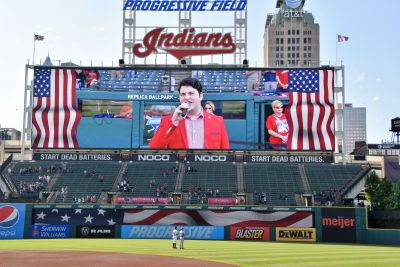 Giovanni Castiglione was walking through the concourse at Progressive Field with his family and friends when he was approached by two men who asked to take a photo with him. Castiglione, 16, sheepishly giggled and posed with the two gentlemen who were in their 40s. “Dude, you were awesome tonight. THAT’S the way the anthem is supposed to be sung,” said one of the men. “You’re too young to know him, but the greatest to ever sing the Anthem was a guy named Rocco Scotti. He used to sing it all the time at the old Municipal Stadium. You remind me of him!”

Castiglione, smiling, said, “I definitely know who he is. He was the best. That was his daughter who was with me on the field when I sang tonight.” Indeed, Jeanne Biscotti Silver, daughter of the great Rocco Scotti, had accompanied Giovanni to home plate as he sang the National Anthem at the May 23 Cleveland Indians game at Progressive Field. Rocco’s grandson, Nick Sabo, a Cleveland police officer, arranged to be there as well. It was Castiglione’s first time singing at Progressive Field and he said his performance was a personal tribute to Scotti.

No stranger to singing the anthem, he has been performing it for sporting and civic events since he was 8-years-old. “Ironically, my first anthem performances were of the Italian national anthem, ‘Fratelli d’Italia’. I’ve sung it at many Italian American events throughout Northeast Ohio. I love singing it because it’s my personal way of staying connected with my heritage,” says Giovanni. “Then, at an event, the person that was supposed to sing the U.S. anthem didn’t show up and I was asked to sing it. I guess they say, ‘the rest is history,’” he said, smiling.

“He’s my new favorite anthem singer,” says Silver. “He reminds me so much of my dad. He’s very talented and sings the anthem with such passion, just like my dad. It’s hard to believe he’s only 16. He has such a wonderful voice, too!”

“Rocco estimated that he sang the anthem over 10,000 times. Can you imagine that?” asked Castiglione.

“I have no idea how many times I’ve sung it, but I think that’s incredible. He was an icon and even though being compared to him is a little uncomfortable, I’m flattered.”

“Rocco made the anthem his own and stylized it. His rendition is amazing, and his voice was awesome. I’m in awe of his talent and passion, but when it comes to the anthem, I’m more of a traditionalist. I prefer to sing it as it was written and avoid putting a twist on it, vocally,” says Giovanni, “But let’s face it, he was the best!”

Castiglione is entering his senior year at Solon High School in the fall where he performs with the Madrigals, a select a cappella group; Music in Motion, Solon’s Show Choir and with the school’s jazz band as a featured vocalist. Outside of school he sings jazz and the standards as a guest soloist with area jazz and big bands. He is also the bass in a collegiate barbershop quartet, Wing It, which is ranked 17th in the world. He will be the youngest to compete in the Barbershop Harmony Society’s International NextGen Varsity Quartet Competition (18-25 age group) when the quartet performs in Salt Lake City in July.

Asked about his career aspirations, Castiglione says he plans to go into music education but hopes to continue performing, professionally. “I love singing the standards, jazz and barbershop, but there’s something really special about performing the anthem. I consider it an honor and a privilege. I cherish every opportunity I have to sing it, but I don’t know if I’ll ever come close to Rocco’s 10,000 performances,” he laughs. One never knows – he’s only 16, after all.