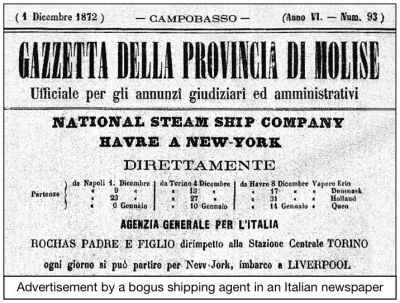 The first Italians to settle in the Mahoning Valley arrived as a ragtag army of strikebreakers during the 1873 coal war. Seven thousand and five hundred miners were on strike when coal operators imported Italians and African Americans to replace the mostly Welsh workforce. These early Italians continued living in Trumbull County after the end of strike. Soon they found jobs on the railroad and migrated to nearby towns and cities in the tri-county area. By 1930, the Mahoning Valley counted 30,000 Italians and Italian American residents.

This short series focuses on those early pioneers who became respected leaders within the growing Italian community and who achieved recognition among the general public. Last month we traced the rise of Stefano Colucci. This month we share the story of Alfonso Saulino (Alphonse Sauline).

Alfonso Saulino and wife Angela Maria first saw America on New Year’s Day 1873 when they disembarked at the Castle Garden immigration station in New York City. These were the years that shipping agents were bombarding the Italian countryside near Agnone with bogus promises of high paying jobs in the United States. Encouraged by these misleading reports, many emigrated in hopes of escaping the poor conditions in Italy. The Saulinos may have been part of this wave of Italians who had responded to the misleading advertising.

In the 1870s, the journey was long and complicated for Italians wishing to emigrate to the Americas. For southern Italians, like the Saulinos, the trip began with a journey to the Port of Naples and embarkation. This first leg ended in Marseilles. From there, the travelers continued by rail to Le Havre on France’s north coast. The emigrants then boarded a steamer bound for either North or South America. In the case of Alfonso and Maria Angela, their ship was the SS Erin.

For the Saulinos and their fellow passengers, the Atlantic crossing on the Erin would turn out to be horrific. Upon reaching Le Havre, all but three of the stewards had abandoned the ship. Her propeller was damaged and the boilers were faulty. Nonetheless, the crippled vessel departed for the United States. Plagued by stormy weather, the 15-day cruise became a 28-day nightmare during which the ship barely reached a speed of five miles per hour. Third class passengers on board were confined to makeshift lodgings on the exposed, wet deck of the vessel. Before reaching New York, six Italians had perished.

Not long after landfall, the Saulinos arrived in Coalburg, Hubbard Township, where he worked in the coal mines and where several of their children were born. Alfonso’s father had been a calzolaio, a cobbler, so it’s not surprising to find the ex-miner in the shoemaker’s trade in the 1880 census. Soon after, he set up shop on Youngtown’s eastside. In 1929, Alfonso moved the business to 3219 South Ave., this time as a widower, since Angela Maria had predeceased him in 1899.

Often cited as the founder of the Italian colony in the Youngstown area, Saulino received many accolades during his lifetime. Among these were at least two medals from the Kingdom of Italy. He received the prestigious Gold Cross of the Società San Giorgio for being the first person to raise the Italian flag in Youngstown. The pioneer was also awarded a medal for his work in the Società Duca degli Abruzzi-Colombo, an organization which he had helped found. The Italian patriotic organization, named for the explorer Luigi Amadeo, Duke of the Abruzzi, had a long and active life in Youngstown. Saulino must have received this honor at the fraternal society’s headquarters located on Summit Ave. in Youngstown, not far from Our Lady of Mount Carmel Church.

While not a man who rose to high rank in the business world, Alfonso Saulino, was indeed a “prominente” of the Youngstown area. The non-Italian public saw him as a proud representative of the Italian nation. He flew the flag of Italy, not just for the enjoyment of his fellow immigrants but as a statement of Italian pride for all to see. On July 20, 1927, in a lengthy article, the Youngstown Daily Vindicator hailed him as “The Father of Youngstown Italians.” Saulino and other locally prominent Italians helped immigrants cherish their heritage while seeking the advantages of U.S. citizenship. With a sense of their roots and with growing political clout, succeeding generations of Italian Americans would benefit from the work of the early “prominenti.”