The Oblate Sisters of Villa Maria: from Italy to the Youngstown Area 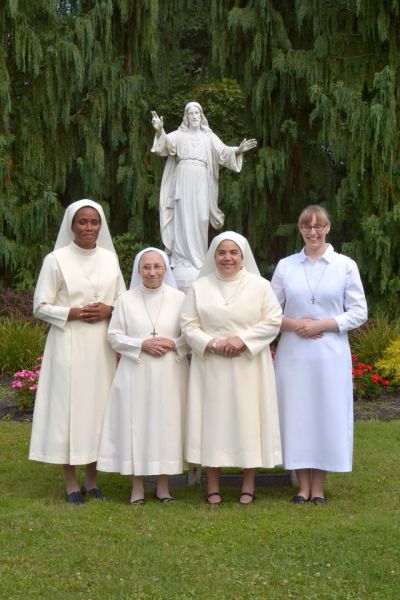 The Italian word “oblato” means “offered.” The Oblates of the Sacred Heart of Jesus have called the Diocese of Youngstown home for almost seven decades. They continue to dedicate their ministry, individually and collectively, as an offering to God. The Charism of their congregation is to pray for the sanctification of priests and to support them in their ministry. This religious order, founded in Rome, sent its first members to Youngstown shortly after WWII. Ever since then, the talented, white-habited sisters have left an important and lasting imprint on our area. Recently, Sister Teresina Rosa, a former Regional Superior and parochial school teacher in the Diocese of Youngstown, shared some of her order’s history in the Mahoning Valley with La Gazzetta Italiana.

Under Pope Leo XIII, in 1894, the Vatican granted Maria Teresa Casini authorization to found the Oblate Sisters of the Sacred Heart of Jesus Institute. In 1892, the religious group built its first motherhouse in Grottaferrata, 12 miles southeast of Rome. There they adopted a focus on caring for priests in several locations in Italy. Because the bombing from WWII had damaged the motherhouse, the nuns fled to Rome where, during the last days of the war, the Oblates and other religious orders heeded Pope Pius XII’s call to shelter Jews fleeing the Nazis. For the sisters, this meant thwarting the Gestapo by disguising the refugees as Catholic priests and nuns. By the conflict’s end – with so much destruction throughout Italy – it was evident that financial help from outside the country would be essential to repair their motherhouse.

Because two of the nuns had relatives in the Mahoning Valley, the motherhouse sent them to the U.S. to seek contributions from Catholics living there. Marian Antonucci, the founder of Superior Beverages in Youngstown and a brother of Sr. Chiarina Antonucci, one the Oblates, played a key role in assisting efforts to raise money. In 1946, he introduced her and Sister Clara D’Amico to Bishop McFaddon of Youngstown. Impressed by the zeal and mission of the visiting Oblates, McFadden extended an invitation to the order to serve the many Italians in his diocese. Having attained the bishop’s recommendations, the two nuns visited Cincinnati and other Roman Catholic communities in the U.S., where their appeals for funds found success. Moreover, the Oblates responded positively to McFadden’s appeal for religious to work among Youngstown’s Italian Catholic population.

In 1949, 10 more Oblates joined the two sisters and established their first convent in the U.S. in McDonald, OH. Although the partial ban on immigration from Italy was still in effect, Congressman Michael J. Kirwin successfully petitioned the House of Representative to allow the Oblates to take up residence in the U.S. In 1955, the Order purchased the Strouss estate on Warner Rd., just outside Youngstown, naming it the Villa Maria Teresa.

During this early period of their history, the nuns staffed parochial schools at St. Anthony’s in Brier Hill, Our Lady of Perpetual Help, McDonald and St. Francis Cabrini in Conneaut, OH. A dedication to teaching the Italian language also marked the Oblates’ contributions to the area. They taught the language at Ursuline High School, Our Lady of Mt. Carmel, Niles and St. Anthony’s in Brier Hill.

While no longer serving parochial schools, today’s Youngstown Oblates work as educators in CCD programs and assist in parish ministry in the diocese. They also run a childcare facility and kindergarten on the grounds of Villa Maria Teresa, where the youngsters receive instruction in Italian.

What began in Italy as a dedication to the spiritual needs of priests continues today in the Mahoning Valley and Naperville, IL, where the Oblates provide three retirement homes for diocesan clergy. In 2015, Pope Francis approved the beatification of Oblate foundress Maria Teresa Casini. The joyful occasion reminds us that Casini’s “offering” has been and continues to be an important, living link between Italy and the United States.

For more information on the Oblate Order, visit www.oblatesister.org.