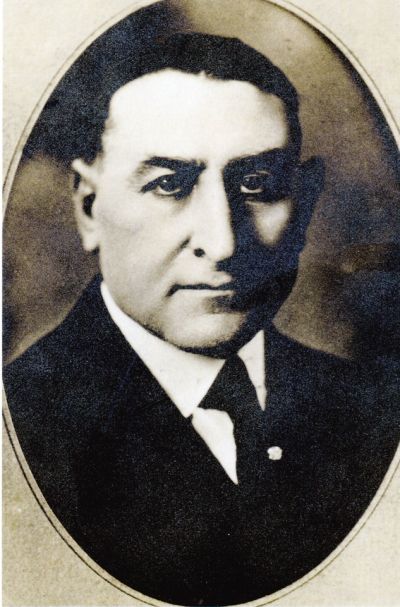 From 1902 to 1938, the greater Youngstown area boasted a weekly newspaper in the Italian language, Il Cittadino Italo-Americano (The Italian American Citizen). Elpidio Buonpane began the paper in 1902 and, in 1920, he sold it to entrepreneur Celestino Petrarca. By 1924, the publication claimed a readership of 30,000, even reaching into western Pennsylvania, where many Italians labored in coal mines. The new owner brought the paper well deserved praise and recognition, for Celestino Petrarca’s lively and informative weekly published news from Italy while encouraging the Mahoning Valley’s large Italian population to attain political power through the ballot box to defend the community’s interests in the United States. Through opinions skillfully expressed by editor Mario Guggino, Petrarca helped usher in a new period where Italians no longer thought of themselves as immigrants or resident aliens but as American citizens.

Celestino Petrarca was born in 1872, in Roccacinquemiglia, province of L’Aquila. He arrived in the Youngstown area in 1913. He and his wife, Enrichetta Tamburro, established a large family of 12 children, 10 girls and two boys, on the east side. Petrarca also owned the Eagle Printing Company, located on East Federal St. He was the founder of the Napoleone Colaianni Sons of Italy Lodge 858, still in existence today. His children staffed the newspaper office, filling positions in the printing and distribution departments.

Petrarca earned particular admiration during a very difficult period for the area’s immigrant community. During this time in the Mahoning Valley, the Ku Klux Klan expanded its anti-black crusade to target immigrants, Catholics and Jews. In 1924, Congress passed the Johnson Reed Act, a partial ban on immigration from Italy and countries in Southern and Eastern Europe. In this atmosphere, the KKK gained widespread political power and even helped elect public officials, including local city councils and the mayors of Niles and Youngstown, OH. Its hooded and white-sheeted members marched and burned crosses throughout the area. Petrarca was forceful in condemning this danger to his community.

In response to KKK activity, militant Catholics organized a counter offensive that responded to the Klan demonstrations with considerable violence, even bombs. As tensions between pro and anti-Klan supporters increased throughout 1923 and 1924, the editorial page of Il Cittadino Italo-Americano appealed for peaceful means to defeat the Klan. On August 9, 1924, Petrarca editorialized:
“Let’s all of us show up at the polls to vote for those men who do not burn crosses, but for those men singing praises to that Christ who preached brotherhood, not hate and slavery. All of us to the polls, for God’s sake! Let’s respond to the oppression not with violence, but by kicking the oppressors out of office with our vote, the only and best right that we enjoy.”

By the early 1920s, Italians constituted the second largest ethnic community in Niles, where in the city’s East End they openly made and sold wine and other alcoholic drinks in defiance of Prohibition. Some operated speakeasies and gambling joints. Seizing on these activities, the KKK saw an opportunity to attack immigrants as immoral and un-American. Adding to the scapegoating of the city’s Catholics, the Klan planned a march on Niles to take place on November 1, 1924. Despite pleas from citizen groups to deny the organization a parade permit, the mayor allowed the event to take place. The march drew anti-Klan crowds who attacked demonstrators in a riot lasting18 hours. Responding to the widespread disorder, the governor imposed martial law on Niles.

During this period of heightened anti-immigrant fervor, Petrarca’s newspaper paid close attention to the embattled Italian community and its major interests: news from Italy and the campaign to end Prohibition and immigration restriction. Historian Ashley Marie Zampogna emphasizes in her study on this difficult period, “Only one local newspaper, Il Cittadino Italo-Americano, provided an account of the events in the Mahoning Valley through the perspective of Italian-Americans.” Moreover, in a series of articles, Celestino Petrarca’s paper urged Italians to gain political power by becoming literate, applying for citizenship and registering to vote. In a word, they should attain their goals by exercising the rights and responsibilities guaranteed them by the U.S. Constitution. For years, every issue of the paper would include the questions and answers for the U.S. citizenship test.

As the partial immigration ban and the extreme economic conditions of the Great Depression made contact with Europe more difficult, Italian Americans looked increasingly toward the United States as their permanent, rightful home. Through the later 1920s and beyond, Italians would use their citizen status to better their situation in politics, the workplace and commerce. Unfortunately, by the 1930s, many Italian organizations and publications had swung their support toward Mussolini. Still, in the period of the early 1920s, Celestino Petrarca’s leadership in the pages of his Cittadino Italo-Americano helped Italians in the Mahoning Valley attain a measure of political power and integration in American life. He was one of Youngstown’s prominenti of that era.

Recently, Carolyn Orsini and over a dozen other Petrarca grandchildren gathered in Boardman to share with La Gazzetta Italiana memories of their grandfather. All attested to his dedication to family and the Italian community. Petrarca hosted Christmas parties at the Dinner Bell in the Uptown section of Market St. He sponsored the first Italian Day at Youngstown’s Idora Park.

For years, Petrarca hosted his large family at annual Easter breakfasts where he, himself, prepared a dish of eggs and pepperoni. This tradition would continue for over six decades in the hands of children and grandchildren. As an employer, he was noted for paying men and women equally, unheard of in those times and even now. Many recalled that Petrarca was an avid Cleveland Indians fan who knew the batting averages of every team member, yet he never attended a baseball game. Like many Italian men of this era, Petrarca loved his cigars and pipe whose aromas would follow him everywhere and leave a lasting impression on his grandchildren. The newspaper owner’s last years, ending with his death in 1964, were dedicated to maintaining close relationships with family and friends.

“America May Not Perish: The Italian American Fight against the Klu Klux Klan in the Mahoning Valley” by Ashley Marie Zampogna is available free of charge at: http://steelvalleyvoices.ysu.edu/resources/collections/italian-heritage-collection.