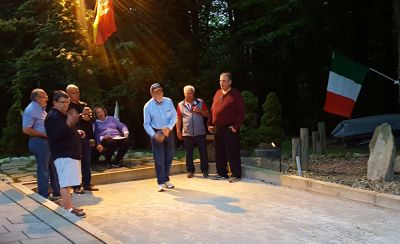 Through its exploration of the Wickliffe Italian & American Club Cleveland Challenge Cup of Bocce, John Vourlis’ documentary film “Breaking Balls” reveals the power of bocce to bring people of all ages together. In its over 30 years, the tournament has become one of the largest in the U.S. and attracts more than 10,000 players and spectators. In addition to serving as a community builder, the film highlights the importance of bocce in perpetuating and connecting people with Italian American heritage. As an ancient Roman game brought to America by Italian immigrants in the early 20th century, playing bocce is vital to carrying on traditions unique to Italian Americans.

After seeing “Breaking Balls” at the Cleveland Film Festival earlier this year, bocce went to the forefront of my mind and I started to think more about its role beyond that of a game. In Northeast Ohio, bocce is usually a part or the focus of many Italian American events. As I was out and about in the Italian American community over the last year, I paid closer attention to the bocce games and tournaments. It appears to be going strong and gaining in numbers of players and places to play.

Besides the Cleveland Challenge Cup of Bocce, two other larger tournaments include The John Anthony Cipullo Tournament at the Alta House and the Northeast Ohio Bocce Classic hosted by Club Molisani. Many clubs, like the Home Family Club and the Solon Italian Club, organize bocce leagues for their members and/or have installed their own courts. Bocce games and leagues have even popped up in private homes and amongst groups of friends.

After their 40th reunion, the St. Joseph High School Class of 1970 was looking for a way to stay connected. The solution was found with bocce. Since 2010, Chuck Giomuso has opened his Kirtland Hills home and backyard bocce court to classmates and friends once a week from May to September. No big prizes are awarded to winners, but attendees often donate money to various causes. The important thing, according to Class of 1970 member and bocce night regular Peter Apicella, is that the weekly bocce gets all the guys together and allows them to act like they are 17 again, if only for a few hours.

Another backyard bocce league that has been going strong for almost 14 years is at the home of Ron “Yatch” Bonacci in North Royalton, OH. Previously, Yatch played in bocce leagues with friends and co-workers at various courts in parks and at clubs. After his mother became ill and he moved in to care for her, Yatch began hosting the bocce games at their home. He eventually installed a raised bocce court where the league plays a friendly competition throughout the summer. The winning team of a best of three series gets a delicious steak dinner. What I was told over and over was that the bocce games at Yatch’s were more about camaraderie, love and support than competition.

The BBC recently published an article “Why Italy is Racing to Save the Game of Bocce.” According to the article, only 300 players are registered with the Italian Bocce Federation as opposed to the 1,200 registered in the 1980s. As I observed, this could not be further from the truth in Northeast Ohio. The game once only played in the Italian neighborhoods of Cleveland has become a widespread leisure time activity enjoyed by many. It’s creating new communities and traditions while assuring that the old communities and traditions carry on.