Saving History - DiGeronimo's Pitch in to Save Italian Neighborhood Landmark 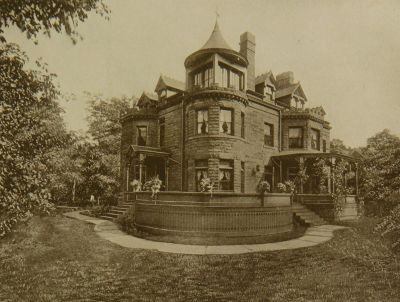 The DiGeronimo Family, founders of Independence Excavating Inc. and Precision Environmental Co., trace their roots to the small paese of Rionero Sannitico in the province of Isernia, Italy. Like many Rionerese who immigrated to Cleveland in the early 20th century, patriarch Sam (Serafino) DiGeronimo settled in the Luna Park-Blue Rock Spring neighborhood centered on E. 110th Street and Woodland Ave. In 1940, Sam built a brick home on Mapleside Road for his wife, Mary DiFranco, and their children. The family moved to Independence in 1950, but they always had a fondness for the area.

In the late 1990s and early 2000s, Tony DiGeronimo, son of Sam and Mary, would periodically pile the family into the car and tour the neighborhood, making a special stop to see Grandpa and Grandma D.’s first home. What they saw during those rides was a community in decline. The formerly vibrant Italian neighborhood had become an area dotted with vacant lots and homes in disrepair, with boarded up or barred windows. One of the remaining homes with barred windows was that built by Sam DiGeronimo. Seeing this during their family car rides, Tony always had a bit of sadness in his voice. He often commented, “Wouldn’t it be great if we could do something to make this neighborhood where our family started a little bit better?”

The sentimental attachment to the Luna Park-Blue Rock neighborhood and the wish to improve it stuck with Tony’s son, Joe. He would always make a point to drive through the area every few months thinking, “What could we do to help? How do we get the bars off of Grandma and Grandpa D.’s home?” Being a construction contractor with no knowledge of neighborhood redevelopment, he had no idea what to do or how to begin. Then, in the spring of 2016, something serendipitous happened.

Joe attended the Cleveland Restoration Society’s annual fundraising luncheon during which CRS Executive Director and President Kathleen Crowther discussed the Society’s concern about the potential demolition of the Scofield Mansion. Joe quickly recognized the building when a photograph of it was displayed on the screen. He thought, “That building is two doors down from Grandpa and Grandma D.’s house in the old neighborhood! It’s the abandoned nursing home!”

Kathleen explained that Levi T. Scofield, famous architect and designer of the Soldiers and Sailors Monument on Cleveland’s Public Square, built the home in 1898 for his family. The area was rural then and the hillside lot he chose at 2438 Mapleside Road had amazing views of Cleveland and Lake Erie. In 1925, the mansion was sold to the Cleveland Catholic Diocese and served as a convent for the next 30 years after which it became a nursing home. It was abandoned in 1990 and has remained vacant and neglected since.

The DiGeronimo Family was completely unaware of the building’s connection to Scofield. On the family tours, Tony never mentioned it as having been anything more than a convent for the nuns who served the Italian parishes of Our Lady of Mount Carmel and St. Marian. Thinking that saving the Scofield Mansion could spark other improvements in the neighborhood, Joe immediately offered the help of his family’s business Precision Environmental Co.

Precision Environmental Co. joined a task force formed by the Cleveland Restoration Society to save the Scofield Mansion along with Coon Restoration and Cleveland Neighborhood Progress. After some discussions, the City of Cleveland Housing Court stated it would rescind the condemned status if the mansion could be cleaned up and structurally stabilized. An engineer was brought in to initiate the stabilization process. Then, Precision Environmental set to work cleaning out the immense piles of trash and debris inside the mansion from caved-in walls and ceilings. Having completed those major tasks, Cleveland Neighborhood Progress is now leading efforts towards redevelopment.

Through the project, the DiGeronimo Family has gotten to know many of the residents who expressed a desire for an improved community in which to live. For these current residents and to honor the memory of Levi Scofield and the Italian immigrants who at one time called it home, it is the hope of the DiGeronimo Family and the others in the task force that saving and redeveloping the Scofield Mansion will be the first step towards rebirth and improvement. As Joe DiGeronimo states, “Wouldn’t it be nice for the current owners of Grandma and Grandpa D.’s house to one day enjoy a view of a beautiful yard and vibrant neighborhood through windows without bars?”

Tweet
More in this category: « Another Italy: Other Realities - A photographic exhibition documenting current Mexican immigration to Italy Saving History - Community and Tradition Through Bocce »