Hillsville, Pennsylvania: The Quarry Town Where Our Story Began 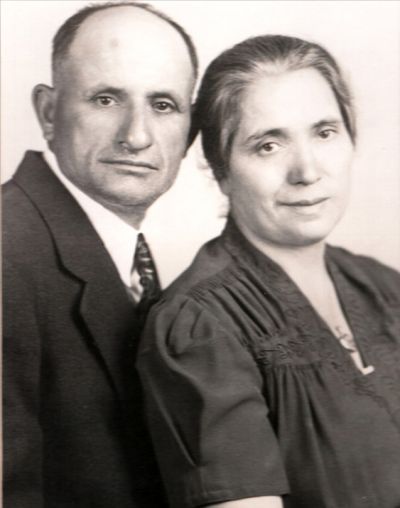 In 1896, Ascienzo Grilli and his wife, the former Elizabeth Strizzi, gave birth to my great grandfather, Berardino Grilli, one of six boys. They lived in Villa Sant'Angelo, a small Abruzzo village in the foothills of the Gran Sasso mountain range. Village population peaked around 1,000 and then declined when many residents emigrated to the U.S., specifically to western Pennsylvania. At age 15, against his parents' wishes, Berardino was determined to join his brother in the U.S. So, in 1912, he ran away from home to Naples, where he purchased passage on the Prinzess Irene. Upon landing in the U.S., the 16-year-old was initially held as a detained alien until his brother could retrieve him. Draft registration records show Beradino living in New Castle, PA, in 1917.

Berardino eventually moved to Butler County, PA, to board with a family of Italian coal miners, also from Villa Sant'Angelo. The wife of the man he was boarding with received a letter from a close friend of hers from the village. My great-grandfather commented to the woman that he recognized the girl, Guiseppina Pezzuti, who had sent a photo. The woman replied that if Berardino found her attractive he should send for the girl. Eventually, Guiseppina accepted his offer. But her parents would not let her embark for the U.S. without first being married, so a proxy marriage was arranged. Berardino's brother, Dominick, was preparing to come to the U.S. He stood in his brother's place at the wedding so that Giuseppina could marry Berardino from across the ocean.

Giuseppina came to this country in 1920 on the steamship Regina D'Italia, accompanied by her two brothers. She was 20 when she arrived, and she and Berardino eventually settled in a small unincorporated community in western Pennsylvania called Hillsville, between New Castle and Youngstown. The major employers were limestone quarries, of which there were many in the area. The quarries in Pennsylvania attracted many Italians, so much so that of the 1,500 residents of Hillsville in the early 1900s, over half of them were Italian immigrants. Many of the quarries hired Italians exclusively, as they had had experience working in similar quarries in Italy.

There are many Little Italy’s in urban areas of the U.S. For my relatives, Hillsville was like a rural American version of their sleepy Italian village. One exception was the strip of company-owned homes on the property of the quarry where the couple first lived.

The U.S. Steel corporation absorbed the Johnson Limestone Company, operating it as the Michigan Limestone Company. The company owned four duplexes in an area known as "The Dump" that my relatives affectionately called Wall Street. It was not a street at all, merely a strip of homes, but they have many wonderful memories of living there. For years, all the residents were Italian immigrant families, until a Polish family moved in. The Italians and the Poles got along well; the Yaksic family eventually learned to speak Italian, but the Italians never learned Polish in return.

Eventually, Berardino purchased a quarry office building and made it the family's home, complete with a large garden where they grew much of their food. The property sat on 6 acres, in an area known as "Peanut," which may have been named for the quarry that once occupied the property. Peanut was a veritable Little Italy, with its large rolling yards, bountiful vegetable gardens, grapevines, and farm animals–all on the homesteads. The neighbors were mostly Italian and several of the streets were named for them. Carbon-Micco Rd., Pezzuolo Dr., Arena Rd., and Retort (née Ritorto) Dr. are all located within the Peanut area. Although the area was considerably further from the quarry than the company homes they previously occupied, Berardino walked to work each day. He put in at least 25 years at the U.S. Steel subsidiary, but did not want his children following in his footsteps.

Instead, Berardino wanted his four sons to attend college and encouraged them to seek higher education. Mario, Domenick, and Albert all received training as electricians; but John, the fourth son, and my grandfather felt that he had spent enough time in school. He told his father that he wanted to work for the Youngstown Sheet & Tube Company, and did so for the next 35 years. His brother, Domenick, later joined him there at Sheet & Tube in the Struthers works, after a stint at the Westinghouse Corporation in Braddock, PA. Albert spent his career at J&L Steel (Cold Metal Products) in Campbell, OH as an electrician, and Mario worked in nearby Lowellville, OH for the Sharon Steel Corporation. All of Berardino's sons worked in the steel industry, so they did follow in their dad's footsteps in a sense, as the limestone he mined was used in the blast furnace process to make raw iron.

These men had careers that paid very well, and all went on to raise families with the same values that had been passed on to them from their father. My grandfather built a brand-new house on the West Side of Youngstown with the money earned at the mill. There he shared backyards with the Italian neighbors that they used as a community vineyard. He, Mr. Lillo and Mr. Thomas (née DiTomaso) would harvest their own grapes, make wine and once a year sit together on the curb on North Bon Air Ave. to enjoy their homemade vintage. Through his father's hard work and the work ethic instilled in him, Grandpa John was able to live the Italian American dream, one that had its beginning back in Hillsville.

At his website therustjungle.com Paul Grilli photographs and documents the Rust Belt, the people in it and the remaining industry.

Tweet
More in this category: « Wine Making in Pittsburgh's Strip District In Calabria, Italy a Pittsburgh-born Rabbi and a Local Catholic Priest Offer an Interfaith Memorial Service for Jews Murdered in Pittsburgh »