In Calabria, Italy a Pittsburgh-born Rabbi and a Local Catholic Priest Offer an Interfaith Memorial Service for Jews Murdered in Pittsburgh 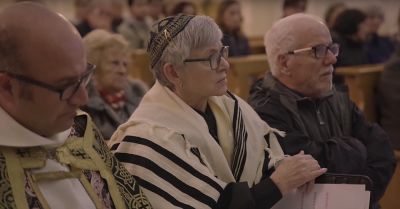 On Saturday evening, November 3, 2018, exactly one week following the brutal attack on American Jews, a tiny village in the mountains of Calabria, Italy, Serrastretta, offered an interfaith memorial service to honor the dead and to speak in a united voice against anti-Semitic incidents that rage on both continents. The service was led by Father Antonio Costantino and Rabbi Barbara Aiello, Italy’s first and only woman rabbi. Rabbi Aiello was born and raised in Pittsburgh and now serves the first active synagogue in Calabria in 500 years since Inquisition times. “We work together,” says Don Antonio, who officiates each year alongside Rabbi Barbara for the annual community Chanukah service. In addition, local priests bring Confirmation class students to the synagogue to learn about the Jewish history of Calabria and specifically about the Jewish founders of the Serrastretta village who established the town following a persecution. Rabbi Aiello has served the Serrastretta congregation since 2006 and she is active in teaching Calabrians about their rich Jewish history.

“Historians believe that prior to the Inquisition the population of Calabria was nearly 50 percent Jewish,” Aiello says. “Many of our residents have Jewish heritage which has created an appreciation of Judaism that I’ve come to love and respect.”

The Interfaith Memorial Service included prayers and songs in both Italian and Hebrew along with readings and messages from the Calabria Club of Pittsburgh, an active group of Italians whose families originated here in the deep south of Italy. By the 1920s, of the five million Italians who had moved to the U.S., over three quarters were from the south, the majority of those originating in Calabria and Sicily.

In fact, demographers note that among all U.S. cities, Pittsburgh ranks fifth in the U.S. in numbers of Italian Americans living there with nearly 80 percent of those families hailing from the “toe” of the Italian “boot.”

Highlights of the service were broadcast by CBS affiliate KDKA-TV and can be found on YouTube at www.youtube.com/watch?v=jz1L4JU-1o0.