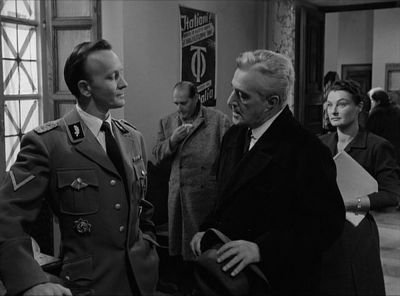 Saturday, April 15, at 5:00 pm
Three with Mussolini
GENERAL DELLA ROVERE
IL GENERALE DELLA ROVERE
Italy/France, 1959, Roberto Rossellini
During the German occupation of Milan in WWII, a petty Italian thief and con man (Vittorio De Sica) is arrested by the Gestapo and forced to spy for them in prison—impersonating a general in order to root out anti-fascist resistance fighters there. Winner of the Golden Lion (top prize) at the 1959 Venice Film Festival and one of Rossellini’s best films. Subtitles. Blu-ray. 140 min.

Sunday, April 30, at 6:30 pm
Three with Mussolini
A SPECIAL DAY
UNA GIORNATA PARTICOLARE
Italy/Canada, 1977, Ettore Scola
On the day in 1938 that Hitler visits Mussolini in Italy, two lonely Romans—a housewife/mother in an unhappy marriage (Sophia Loren) and an anti-fascist journalist recently fired and awaiting deportation (Marcello Mastroianni)—meet and hang out while everyone else is at the big parade and rally. Loren and Mastroianni are far from glamorous in this touching, well-acted film that, 40 years ago, garnered many nominations and awards. Subtitles. Blu-ray. 107 min.

The Cinematheque is located inside The Cleveland Institute of Art at 11610 Euclid Ave. There is free parking via E. 117th St in Lot 73 directly behind the theatre. For more information call 216.421.7450 or log onto www.cia.edu/cinematheque