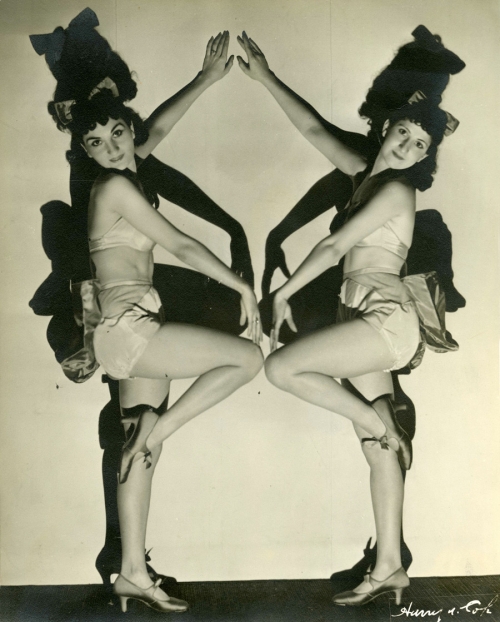 They danced all over Cleveland, all over Ohio and on many national stages. They were a hit on the famed R.K.O. Vaudeville Circuit. They received top billing in the performer line-up with notable tag lines such as “The Fame Blessed Sisters,” “Sophisticated Dance Team,” and “Popularity Winning Favorites.” Katherine and Josephine Ferrando, known as The Ferrando Sisters, made a name for themselves in Vaudeville and were beloved entertainers throughout the 1930s.

The Ferrando Sisters were born in Cleveland, OH; Katherine in 1911 and Josephine in 1914. They lived on Frank Rd. in the Blue Rock Spring neighborhood, but by 1920, their parents had moved the girls and their two siblings to the Fairfax neighborhood on E. 97th St. off of Cedar Rd. Both attended East High School. In Katherine’s senior yearbook, it stated she was to go on to Western Reserve University after graduation. But, there is no record she actually attended. It seems she chose to dance and entertain instead.

Mary Ferrando was the doting mother who ignited the love of dance in her two daughters at an early age, enrolling them in ballet lessons at the DuPerow Dance Academy on Euclid Ave. She was active in several arts organizations, including the Cleveland Institute of Music, and managed The Ferrando Sisters professional careers. Mary was born as “Vincezina” in Cleveland in 1888. Her parents were Giuseppe and Giuseppina Lombardo. After immigrating to America in 1887, the Lombardo family settled on Mayfield Rd. and was among the first Italian families to arrive in the Little Italy neighborhood. In 1909, Mary married Clement Ferrando from Navarre, OH, the son of Italian immigrants Carmine and Caterina Ferrando.

As Vaudeville waned in popularity in the early 1940s, The Ferrando Sisters hung up their dancing shoes and found other paths. Josephine worked at the Veterans Administration as a supervisor. Katherine married Italian immigrant Joseph Mele in 1946. She worked at the Ohio Bell Telephone Company as a telephone directory representative. It is unknown when Josephine passed, but Katherine died in Willoughby, OH, in 1988 at the age of 77.

Unfortunately, this is all I know of The Ferrando Sisters. I never did get to meet them or talk with them. And, if I did, I can only imagine what amazing stories they could tell!

Their story and career came to light through a scrapbook that a distant relative of theirs donated to the Western Reserve Historical Society’s Italian American Collection in 2008. The scrapbook is full of newspaper clippings of the sisters’ shows, family photographs, birth and death certificates, and a few newsletters and programs. I enlisted the help of an intern who conducted some research on the sisters and the family on Ancestry.com and in The Plain Dealer archives. While we don’t know all the personal stories, enough was uncovered through the research and scrapbook that we can share in a small part of the lives of two Italian American Vaudeville stars.