The Pride of Youngstown 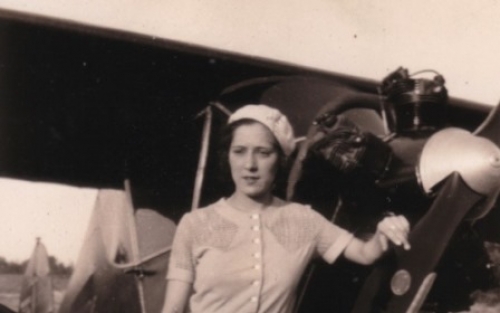 On June 4, 1933, the fog continued to frustrate the impatient crowd massed at the Lansdowne Airport, Youngstown's first municipal airfield. There was little trace of the single engine plane that carried the daring pilot who had decided against packing a parachute or a radio, for fear of depleting the fuel supply. For over 12 hours that Sunday, the fragile Taylor Cub single-engine had remained aloft, obscured by the clouds. It was only the impending thunderstorm that forced the fearless Youngstown aviator to land, thus ending the pioneering flight. Nonetheless, it was one that broke the world endurance record for light airplanes - 12 hours, 27 minutes. When Mary Ann Campana, Youngstown resident and native of Barrea, Italy, stepped out of her aircraft, the police couldn't contain the throngs rushing to greet her, including many who would attend her live debriefing later that day at the State Theater on Federal Street.

Who was this phenomenon that put Youngstown squarely on the map in the daredevil world of early aviation? In 1921, Mary Ann and her family emigrated from Italy and eventually resided at 1315 Quinn St., on Youngstown's East Side. She attended Lincoln Elementary and East High School. During her teenage years, she developed a deep desire to fly. By 1932, at age 18 and working part-time at the G. C. Murphy Five and Ten, she became the first woman to earn a pilot's license in Ohio and the first Ohio teenager to solo. Just months later, she set her sights on winning the world's endurance record for light aircraft. In the quest, she brought along the entire Mahoning Valley with her.

Mary Ann's was an age of tumbling world flight records: in distance, speed, and endurance, and one in which a rapt public could easily follow the record breakers (Charles Lindbergh and Amelia Earhart, Italy's Francesco Agello, and now Youngstown's Mary Ann Campana) via the radio, newsreels and the press. The local newspapers, the Youngstown Vindicator and the Youngstown Telegraph, reported on her exploits, ever building the crescendo of coverage in advance of the young woman's June 1933 endurance attempt. Once accomplished, the nineteen-year-old flier's winning record leapt from local newsrooms to the annals of international flight.

Campana often expressed her passion for seeing the world as a female pilot. One of the keys to winning acceptance, she remarked in a 1987 oral history interview, was in making the airport her second home. "You went to the airport every night, whether you flew or not," she recalled. Participation in the chores, especially aircraft maintenance and record keeping at Youngstown's Watson and Lansdowne Airports, molded a community of pilots, though often it meant scraping carbon off of dirty valves with the men.

By 1943, the year of her last piloted flight, Campana left the skies and settled into a successful career as a department store buyer for Strouss-Hirshberg and then for the May Company. Eventually, she and colleague Leonard C. Rosenberg opened Pollyanna Clothes, a chain of children's wear. In her business travels in the U.S. and abroad, she accomplished what she had wished for in flying, to see the world.

No doubt, Campana's spirit and success as a woman aviator aided Amelia Earhart -she met her twice - in breaking the gender barrier that said that flying was for men only. And in an era when Italian immigrant women were confined to the home or to the clothing sweatshop, Mary Ann Campana showed the world what a daughter of Italy could do in America.

The archives of The Tyler History Center of the Mahoning Valley Historical Society has a collection, documents and audio, on Mary Ann Campana. Many thanks to the archivists there for help researching this article.

Tweet
More in this category: « Buon Natale from Our Lady of Mount Carmel Church A Taste of Home at Carmella's Café »