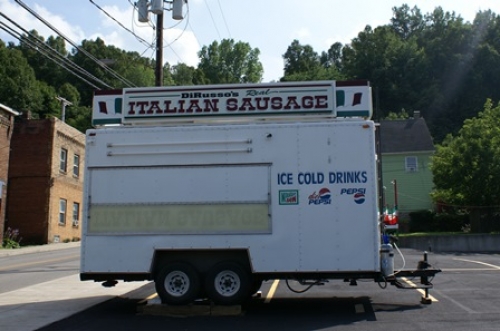 Lowellville is a small village nestled along the banks of the Mahoning River, just west of the Pennsylvania border and nine miles from Youngstown. You won't find the streets busy with tourists like you do in the big city "Little Italys" around the country, but nonetheless if the Mahoning Valley were pressed to designate an entire town as a Little Italy, it would certainly be hard to argue against Lowellville. The community has a strong Italian American heritage dating back to the 1870s when the first Italian immigrant, Giuseppe Pesci, settled there. Today, over 37 percent of its residents claim Italian ancestry, ranking the town as number 12 on the list of American communities with a population of over 1,000 whose residents claim a high percentage of Italian ancestry.

The stories of Lowellville's Italian immigrants are very similar to those of other Italian enclaves. Most came from the Mezzogiorno of Southern Italy to escape the extreme poverty and corruption that plagued the South. Its peak immigration period was in the 1910s. Newly arrived immigrants benefited from the abundance of employment opportunities that the surrounding limestone quarries and iron and steel mills offered to those willing to work hard in very dangerous working conditions. They would buy a round-trip ticket to America, perhaps following an older brother or paesano who had secured a job for them. At first, it was mostly men who immigrated to America and they would board together in homes on the village's South Side. Many never intended to stay permanently, but only long enough to earn some money and then return home. This was a pattern frequently repeated. Come to America, work in the mill or quarry, after a year or two, return home and then save enough money to make the trip again. The term for these temporary residents is "birds of passage." However, soon many of these "birds" began to develop a strong sense of community and connection to their new land. As the immigrant population grew, many of the earlier immigrants left their mill and quarry jobs to start small businesses that catered to the Italian community. Immigrant-owned barber and tailor shops, grocery stores and taverns sprung up along the streets of Lowellville's Italian commune. Instead of sending all their earnings back home, the married men saved some of their wages to buy passage to America for their families. Once wives and children were here, there was no going back.

Lowellville's single Italian men wanted Italian women. This led to brothers arranging marriages between their sisters back home and their co-workers here. In many Southern Italian villages, the eligible men had already left for America, so there was much incentive for a lady to accept an offer of marriage to a man she never met, perhaps only seeing his photograph. This intermarriage between families soon led to a very cohesive and strong bond among the Lowellville Italians regardless of which Italian village they were born in. Calabresi married Abruzzesi and Siciliani married Pugliesi.

Today's Lowellville offers well-kept and affordable homes tucked into a valley with tree covered rolling hills and a river that's on the rebound after many years of industrial use. Its views are much like the rolling hillsides of Southern Italy. Second and third generation Italian Americans serve in important civic roles in the community such as mayor, village council and fire chief. Its rich Italian heritage is deeply woven into the town's traditions. For example, the village showcases its heritage through the Mt. Carmel Society (officially the Fraterna Società Della Madonna Del Carmine) which was founded in 1895 by Pietro Pirone who emigrated from Naples. The purpose was to assist its members in sickness, provide death benefits for their families, and promote allegiance to their new country. The Society has 130 members and hosts a festival every July which attracts huge crowds from the surrounding area for its Italian food, bocce and morra tournaments and the original music of the 88-year-old Mt. Carmel Band. Over a century old, the celebration helps 6th and 7th generation Lowellville families discover what it means to be an Italian American. There are bocce courts in town where spirited games are regularly played. It is a town where morra is played at family gatherings and on Sundays driveways are full of cars belonging to sons, daughters, and their children who are at nonna's house for spaghetti and homemade sauce.

Northeast Ohio's famous DiRusso's sausage got its start in Lowellville back in the 1930s when Adeline DiRusso began making it out of her home on the South Side. Today, DiRusso's products are in grocery stores in Ohio, New Pennsylvania, New York and West Virginia, as well as in stands at fairs and festivals across Ohio and beyond. In 2006, L'uva Bella Wine Gallery and Restaurant opened a California-style establishment that sells its own wines and juice for the home bottler as well as offering dining on the weekends. The downtown boasts two additional restaurants that offer Italian cuisine, Carchedi's and the Station Grille at Mellilo's Tavern.

Italian surnames are commonplace among its residents, but what makes Lowellville an Italian American community is the obvious pride shown in its Italian ancestors and the strong desire to keep their traditions alive and prospering in a little corner of the Mahoning Valley.

Tweet
More in this category: « Buon Natale from Our Lady of Mount Carmel Church The Pride of Youngstown »