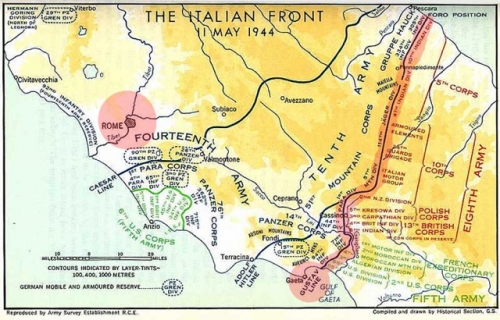 If the old saying, "What doesn't kill us makes us stronger," carries any weight, then John Caniglia, 88, of Warren must be one of this proverb's best exemplars. Born in Ravenna, the retired carpenter and pipe roller is the only child in his parents' family to reach adulthood. That's just the beginning of a life lived in the face of many dangers, several of which he recently shared with La Gazzetta Italiana in an animated storytelling session that included a loving assist from daughter, Sister Joanne Caniglia, O.P.

John had lost his father by the time he turned three., With no close family in Ravenna, Ohio, John and his mother returned to her native Rivisondoli in Abruzzo. About a decade later, in July 1943, Italy threw off Mussolini's dictatorship and signed an armistice with the allies, thereby ending the country's military alliance with Hitler. The Nazis reacted quickly by building the Gustav Line, a series of fortifications high in the Apennines overlooking the Sangro Valley. This was to stop the newly landed allied armies from liberating Rome. Unfortunately, the German front fell right on top of Rivisondoli and other nearby mountain villages.

Then a teenager, John experienced first-hand the German occupation of the town. The Nazi command established its headquarters in the resort hotel, where young Caniglia was working as a waiter. In just a few weeks, the German occupiers managed to enrage the local population by confiscating all of Rivisondoli's livestock. With opposition in the town quickly building, the Germans feared that the food and drink provided them at the hotel might be poisoned. Consequently, John was ordered to partake in all the meals prepared for the commander and his staff. In addition, he had to assist them with his carpentry skills in constructing bunkers. They liked him, calling him "Piccolo." But there was the danger that they might send him out of town. Luckily, the German-speaking hotel owner tipped Caniglia off as soon as she learned of plans to ship him to Germany.

Before that could happen, Caniglia had the assignment to locate a posthole digger, a tool the Germans needed to build one of their many bunkers along the Gustav Line. At some distance away from the construction site, John one day was approached by a van driven by German soldiers. "Sulmona, Sulmona," they yelled. They were asking for directions to this important rail hub and industrial center. John quickly seized the moment to inform the driver that he knew the route well and, as a matter of fact, was on his way there, too. Could they give him a lift? The reassuring patch on his shirt identified him as a civilian working with the German Army. Off to Sulmona John went in the van, ending his servitude in the Nazi headquarters in Rivisondoli and avoiding an uncertain future in Germany. He could have been shot for escaping.

In fact, Sulmona is where his mother had relocated. After reuniting with her, Caniglia settled into civilian life there. One day, he was given an errand to buy stamps at the central post office, but a friend convinced him to pick cherries instead. There would be time to buy the stamps. A few hours later, the deafening roar of allied fighter planes heading for the city ripped the young men's attention away from their fruit picking. The ground shook. Seconds later, Sulmona's train station was flattened, as was the nearby post office. The young men realized they had escaped certain death-by a hair. Over a hundred people perished that day in August 1943; the war's first mass bombing of an Italian civilian target. "My mother and my aunt, knowing of my errand to buy stamps, ran screaming to the ruins thinking I was under them," recalls Caniglia.

With Rivisondoli and other towns along the Gustav Line reduced to rubble, the war's end saw sixteen-year-old John working in Rome. One day in the capital, he found himself on a street where a sign read, "U.S. Embassy." Recalling that he was an American citizen, Caniglia entered the building and was warmly welcomed and encouraged to return to the U.S. Luckily, a troop carrier was leaving Italy for New York soon and would be taking on a limited number of civilian passengers. Would he like to embark on the next sailing? John responded positively. With money wired to him from an uncle in the states, the young man left for his native land.

Back in the U.S., John first worked as a union carpenter and later as a roller at Van Huffel Tube, Warren. In 1950, he married Celeste Campana, and they raised four children. Retired and recently widowed after 63 years of marriage, the World War II survivor comfortably recalls the trials of his youth. When you've been as lucky as John, there's great delight in sharing your stories with family and friends. In fact, anyone privileged to listen to his breathtaking stories will notice the sparkle in his eyes.