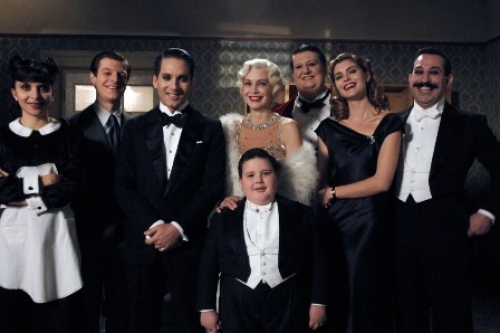 The Cleveland Italian Film Festival 2014, showcasing award-winning films from Italy, is open from September 18 - October 9, 2014, at the Cedar Lee Theatre in Cleveland Heights, the Atlas Cinemas Eastgate in Mayfield Heights and the Capitol Theatre in the Gordon Square Arts District.

The films promise moviegoers comedy, drama and romance. All films take place Thursdays at 7:30 p.m., and there is a pre-film dinner each night from 5:30-7:00 p.m. Tickets go on sale June 7. All tickets will be sold in advance for the festival, which sells out early each year. For film tickets ($10) and pre-parties ($20 including tax, gratuity and beverage) and information please call: 216-456-8117.

The Cleveland Italian Film Festival is the first independent film festival in Northern Ohio to exclusively showcase Italian award-winning films in a professional theatre setting, and it has sold out every year since its inception.

Acclaimed chef and owner of Dante's, awarded the Michelin star, Chef Dante Boccuzzi will kick-off the festival with a sumptuous Roman dinner, September 14 at 2:00 p.m. It's a special culinary treat for self-described foodies and those who wish to enjoy a unique food experience. This event also sells out early each year. ($100 per person includes all wine for each course, tax and gratuity.) For reservations, please call: 216-456-8117.

Pietro's only dream is to become a famous actor. Moving to Rome, he shares a tiny apartment, with just one bed, with his cousin Maria. He works for a bakery at night, making croissants for Rome's bakeries and bars, while working by day on his dream of acting.

His luck turns when he finds a huge, beautiful house at a knockdown price in one of Rome's best districts. But shortly afterward, this great house has some very weird things happening. The adventure begins when he realizes his house has some unforeseen guests.

Not your typical American linear story, this Fellini-esque film of Italy's decadent, leisured class has faded novelist Jep Gambardella (played brilliantly by Toni Servillo) at the center of Roman nightlife, reflecting on his life and unfulfilled desires. "La Grande Bellezza" is a compelling tragicomedy in the tradition of Fellini's "La Dolce Vita."

Set against the backdrop of the eternal city, you'll experience sublime photography and spectacular views of historic Rome. Jep's friend, Cardinal Bellucci, tipped to be the next pontiff, has knowledge of Rome's occult secrets, and 75-year-old Roberto Herlitzka hilariously portrays him. This film conveys life's lessons of love and loss, a piercing look into various forms of power and prestige, and more importantly, how beauty can mend the effects of life's disenchantments.

This comedy portrays Enrico Olivieri, the head of the major opposition party, in a serious crisis when the polls show he is losing the election. His solution? To vanish! He goes to Paris and hides out at an old girlfriend's house as everyone tries to find the vanishing politician.

Frantic party officials find out Olivieri has a twin brother, Giovanni, and they convince him to take the place of his missing brother. His poetic, citizen-oriented public speaking suddenly has the party rising in the polls once again, with crowds enthusiastic with admiration. But someone is watching the party's rising popularity from his secret hiding place, waiting. Toni Servillo gives a consummate performance in this winking critique of Italian politics.

A lively, madcap comedy about the survival of love, Guido (played by Luca Marinelli) is an academic genius from Tuscany who spends his life stalking bookstores when he is not working as a night porter at a hotel. The love of his life, Antonia, is a fiery, talented musician from Sicily.

This poignant and funny film tells the story of the real McCoy love affair, always pulling and tugging on your heartstrings. Love conquers all. Or does it?