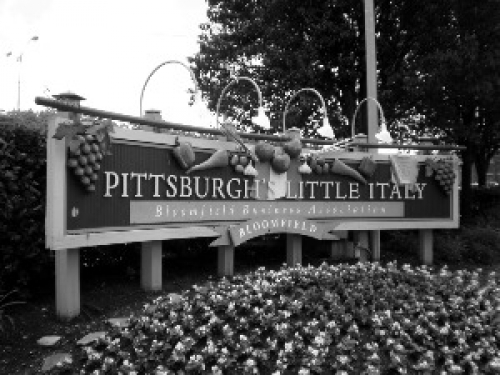 Almost every large city in North America has one. In western Pennsylvania there are enclaves of Italians in every community from New Castle in Lawrence County; Monaca, Aliquippa, and Ambridge in Beaver County; Coraopolis, McKees Rocks, Oakland and Morningside in Allegheny County; New Kensington and Vandergrift in Westmorland County; and Canonsburg and Cecil in Washington County. But, in the Pittsburgh district, the official "Little Italy" is located in Bloomfield!

Historically, the Bloomfield area pre-dates the American Revolution and was known as the Taub-Winebiddle Plantation, established in the 1700s to grow crops and graze cattle for the British troops during the French and Indian War and later for troops garrisoned at Fort Pitt. The city of Pittsburgh was incorporated in 1816 and the plantation was broken into large tracts of land and sold off to wealthy individuals. At the end of the Civil War in 1868, Bloomfield was annexed to the city of Pittsburgh.

The first immigrant settlers to Bloomfield came from Germany. They laid out the streets and built row houses in the German tradition. Liberty Avenue became the main thoroughfare to downtown Pittsburgh, just three miles away. As the neighborhood grew, so did the local businesses. St. Joseph Church was built in 1885 and still stands as a beautiful landmark of the area and is well worth a visit.

Italians began moving into Bloomfield in the early 1900s with a large wave of Italian immigrants arriving about the time of WWI. Immaculate Conception Church was erected originally in 1906 and while nearby St. Joseph was primarily a German Catholic church, Immaculate Conception was established to care for the spiritual welfare of Italian Americans in the Bloomfield area. Today the two churches are joined as one parish under the pastorship of Fr. John Dinello.

Bloomfield is not a totally Italian community. A variety of nationalities reside in the area and contribute to the vibrancy of the neighborhood. Taking a stroll on Liberty Avenue, you will find a business district that not only serves the community but also employs its residents. This is a living, working neighborhood with a wide variety of businesses including grocery stores, bakeries, restaurants, coffee shops, clothing and music shops, churches, dry cleaners, hospitals, druggists, card and gift shops, doctors and legal offices, a florist shop and a small appliance repair shop. Almost everything people need is here within walking distance.

The Sacred Heart of Jesus store on Liberty is a shop that carries books, bibles and religious articles. As you enter the store, you are greeted by the Sisters and offered a cup of coffee. Most of the items in the store are slightly used or rescued from the dresser drawers or attics of older homes. If a prayer book has been printed, they probably have a copy in the store and it is never overpriced.

Gastronomically speaking, Bloomfield's restaurants offer something for everyone. Although the choices are predominantly Italian, there are Thai, Chinese and Polish restaurants as well. Del's Restaurant, located near the Bloomfield Bridge, is the oldest of the area restaurants. It opened in 1949 and is still family owned and operated. The Pleasure Bar, Lombandozzi, Alexander's Pasta Express, Stagioni and Damico's are just a few of the local places to enjoy a meal.

Tessaro's, winner of the "Best Burgher in the Burgh" award, is another favorite spot where friends gather to meet and eat! Their juicy half-pound burger, piled with your choice of condiments is served hot off a wood fired grill to your taste. Dominic Piccola, the restaurant's in-house butcher, chops the ground beef fresh every morning.

Another very popular food store is the Groceria Italiana. Located just of Liberty Avenue on Cedarville Street, this immaculately clean "super alimentari" offers a complete line of Italian food items and baked goods and is best known for the variety of homemade ravioli and pastas. The store is owned and operated by Rose Marie Ricci and her son, Jim Luvara. Rose Marie does all of the cooking in the kitchen, which is located in the store's basement. Her carryout foods are prepared as if she were cooking for her own family. The taste tells the story the best! While Rosa Marie's energy moves throughout the store, her son Jim keeps the "tops on all the pots," and operates the market in the calm, service-oriented Italian way.

Merante Gifts, another staple of the neighborhood, is a virtual magnet for visitors to Bloomfield. Maria Merante has operated the store for almost 30 years and has filled every nook in the store with Italian glassware, statues, specialty items, Italian ceramics, wedding invitations and favors, and many one-of-a-kind gifts. Maria's energy extends to many aspects of the Bloomfield business community and she is instrumental in the organization of the Bloomfield Italian festival in September and the Columbus Day Parade in October. Maria's boundless energy does not stop there; she conducts cooking classes on Saturday mornings and has organized cooking tours to Italy and cultural and gastronomic tours to New York City (see So you think you can cook, LA GAZZETTA ITALIANA, June 2010).

Dan Cercone's barbershop in Bloomfield is another mecca of the community. The shop was opened in 1931. Mr. Cercone immigrated to the United States from the Abruzzi region. Like most barbershops, Cercone's is a place where men and boys of all ages drop in to have their hair cut, browse through magazines and catch up on the local happenings while they await their turn. The Cercone family has been involved in the Bloomfield neighborhood for three generations. Mr. Cercone supported many local sports teams through the years and even when times were tough, he still felt the necessity to fund youth sport programs. Many of today's adults in the neighborhood were provided the opportunity to participate in sports when they were young because of Mr. Cercone's generosity. Today, the barbershop's shelves are lined with memorabilia and trophies from those neighborhood teams. Dan Cercone's daughter, Janet Cercone Scullian, has followed in her parents' footsteps as a community activist who continues to push for the betterment of the Bloomfield area. She has published Spirit of Bloomfield, a family magazine, as a community service project since 1990.

Two major events are held in Bloomfield each year: Little Italy Days and the Columbus Day Parade. Little Italy Days, which will be celebrated this year on September 24-26, is a neighborhood-wide street festival celebrating Italian heritage. Liberty Avenue is reduced to one lane in each direction to allow for the many booths and street vendors. There is continuous entertainment featuring Italian music, a bocce tournament, and plenty of good food. This year during Little Italy Days, a memorial to the three fallen Pittsburgh police officers, will be dedicated in front of the St. Joseph Parish Rectory. One of the three officers, Paul Sciullo, was a life-long resident of Bloomfield. The Annual Columbus Day Parade will be held in October. The parade route was moved from downtown Pittsburgh to Bloomfield, due to the neighborhood's cultural heritage.

As you look across the landscape of this vibrant Little Italy and walk through the narrow one-way streets lined with row houses (which use up most of the narrow lots they are built on), you can almost feel the energy of the thousands upon thousands of men and women who have put their energies into the heart of Bloomfield. Their legacy is here today for us to enjoy, experience and maybe add something to that special mix!

Author's note: You may wish to take a walking tour of the Bloomfield neighborhood with Burgh Bits and Bites. Contact them at www.burghfoodtour.com or call Sylvia McCoy at (412) 901-7150.