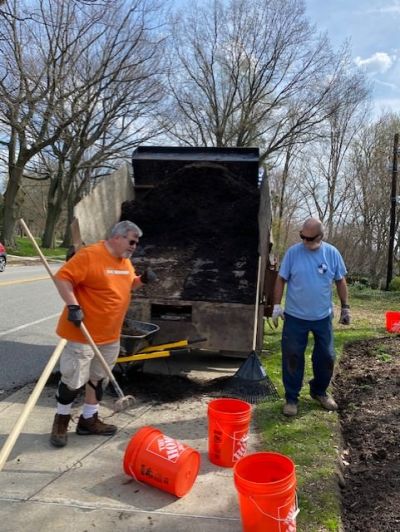 It is fascinating to understand what motivates someone to volunteer. It might be a desire to help where needed or, in the case of the Italian Cultural Garden, Cleveland’s cultural monument to Italy, a certain pride tied to one’s ethnicity and history. Education is useful to learn exactly what this public space represents and why the public has made it the most visited of the 70 acres in Rockefeller Park.
I would like to thank the volunteers who have been with us and those who recently joined in the last 6 years when we became fully planted and encourage those of you who may have been thinking about volunteering. But first, it might help to learn what exactly does this space represent and why one could consider being a volunteer. What is the meaning behind this public space?
I always find it interesting how many are under the impression the Italian Garden is just a pretty flower garden. The driving force behind this special space since 1930 has always rested in honoring and sharing our cultural greats throughout history and giving Italy’s cultural arts to the general public.
In fact, the mission statement from 1930 said just that: “This is dedicated as a symbol of the contributions of Italian culture to American democracy.” And they achieved this by including images of Italy’s giants of history in the Arts & Letters and Arts & Science when it was built.
We would like to invite everyone to join volunteers at various times throughout the year as this welcoming public space today requires more volunteer help than ever to wake it from its winter slumber to dressing it up for spring.
Here is a snapshot of some of our volunteers! Since the early 1990’s Gino Colage devoted himself to keeping the grounds in order by himself. In 2007 the $1.5 million restoration included plans to plant the garden with plantings and flowers indigenous to a Renaissance garden because the Italian garden and hardscape is designed in a late Renaissance design. In 2012, Anthony Ianiro was brought aboard to carve out our main path beds. He also turns on our irrigation system in the spring and helps at various garden work gatherings. Stan Lorence and Mike Spena also joined us in 2012.
The Italian Cultural Garden, became fully planted six years ago as a result of a very large donation of plant material from Billie St. Angelo for both levels of this 3.5 acre space. This was followed by AJ Pettiti’s hydrangea and roses donation along the lower retaining wall and his donation of purple petunias each year.
Mike Spena helps us prepare the large Renaissance fountain in the spring, weeds and mulches the garden, gets the mulch donated, and prunes plantings when needed. Mike is the garden’s jack-of-all-trades, which also includes installing benches.
Every year, Stan Lorence donates the flowers for the three entrance pots and the lower-level beds. He trims trees, prunes, feeds the roses, and last year donated 10 urns and flowers for the lower level. He also organically treats the weeds in the large pavement areas on both levels, helps with the fountains and beautifully decorates the Italian Garden at Christmas enticing lines of cars that visit.
A heartfelt thank you goes out to our steady volunteers who always show up: Robert Lippucci, Italian Garden delegate to the Cultural Garden Federation, Chuck Giomoso, Maryanne Baucco, Lisa Judge, Maryanne Mitri, Caranina Chesmar, Susan Varga, I Molisani Club members, NOIA members, and to those you who volunteer whenever you can.
Beside its beautiful hardscape, wide walkways, large winding staircases, and two large Renaissance fountains, the reason for the garden’s existence from the beginning has always been to honor Italian cultural greats in the Arts & Letters and Arts & Science and offer the cultural arts of Italy to the public.
Our newest addition last year of black granite medallions honoring Michelangelo, Leonardo da Vinci, Galileo, Donatello, Bernini, Palladio, and Ovidio, (totaling $63,000) joined Giuseppe Verdi, Virgil the Roman poet, Giotto, Marconi and Petrarca, and the statue of Dante Alighieri ($134,000) the Supreme poet erected in 2012.
The Italian Garden's hardscape and beauty along with its very popular “Opera in the Italian Garden” has made it the most visited today by the public of the 70 acres of gardens in Rockefeller Park
During a $1.5 million restoration with $593,074 completed, we look forward to finishing the original plans from the 1930’s that were never completed: a Pantheon structure ($500,000) calling for names of 200 famous Italians from the Romans down through the Renaissance to present day in the sciences, art, literature, and music. This eclectic project planned over 90 years ago should be a motivation to those in our community who have been blessed with success to take a major part to help complete these original plans.

Now that we have explored what the Italian Garden represents, we are hoping some of you turn the burning pride you feel for your Italian culture by volunteering when you can to help tend this enchanting space, either joining our volunteers who maintain the garden, helping with our events, or donating to our restoration in progress.