On Writing a Book About Italy 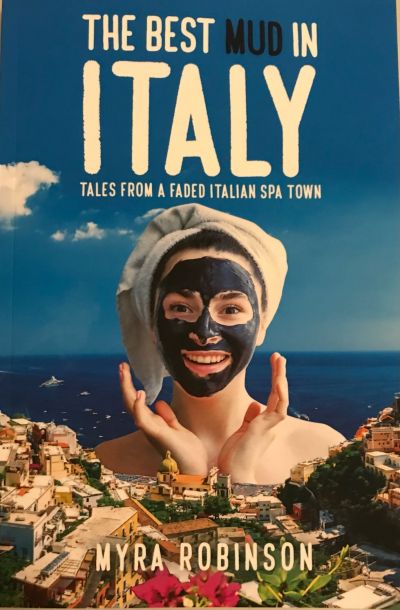 After a decade of living half my life in my second home in Italy and trying to understand how to live like an Italian, I decided to begin writing about my experiences. At first it was the odd article here and there, about trouble with Italy’s convoluted bureaucracy or setting up my English Conversation Group, but my writings began to expand into all sorts of areas which fascinated me, like taking the traditional (and death-defying) mud cure and having an article about it published in The Daily Telegraph. I began to realize I might be able to write a book.

For a while, I collected my ramblings on paper and began to sort them into categories, but I soon saw that there was no common thread to make them into a book, although individually my little tales could be quite interesting. Then it struck me that the unifying idea could be the journey from buying my apartment to becoming slowly absorbed into Italian life and converting my partner (Phil in the book) from a cautious traveller who did not want to take part in my crazy adventure into an enthusiastic Inglesi who often says these days, rather embarrassingly, “Io sono quasi Italiano.” “I’m almost Italian!”

My first foray into the world of publishing was not a success. It was self published, and more a series of tales than the story I wanted. Nevertheless, I was approached by a Polish agent who wanted to buy thetranslation rights. I was flattered, but before anything was signed, the moment passed, and nothing further happened. I had also given it an obscure title “Fried Flowers and Fango,” (fango means ‘mud’ in Italian) so nobody would have known what it was about. I have now disowned that first attempt!

After a couple of years, I felt more confident about writing something more coherent, and I came up with a much better title, “The Best Mud in Italy.” It was inspired by meeting a man who was having a course of mud treatment for his rheumatism and recommended the local mud in those terms. I was really writing for my own amusement, so I just found a local printer who produced copies for me on demand. My big mistake was not having an ISBN or Library of Congress number, so it was not widely available and could only be sold locally when I gave talks about Italy.

During lockdown I began to feel I had wasted an opportunity, and my book could reach a wider audience. I improved the text and added another chapter, then wondered what to do.

Coincidentally, I was approached by someone from a publishing house called Sweetspire Literature. She had obviously read and enjoyed my book, and suggested I should let them republish it officially, with the means of selling it on Amazon and in bookshops. It was a reasonable price, and I was pleased at her response to my writing. Perhaps I should have sent it to other publishing houses, but I didn’t, so we went ahead.

They came up with a fantastic new eye-catching cover, and I had high hopes of becoming a best seller! They also suggested that I might add photographs to make my tales come alive, and this I have done. However, contact with the company became increasingly less reliable and many of my questions either took a long time for a reply or were not answered at all. I have had to resort to completing the paperwork myself for the distributors to be able to supply my books to bookshops.

I have had an amazing review from the librarian at the American Army base in Italy who recommends my book to new recruits as a way of ‘getting into’ Italian life:

“Looking for a handy guide to learning about the quirks and charms of the Veneto? I highly recommend "The Best Mud in Italy." The author has a gift for bringing people to life on the page and there are insightful tips about visiting everything from stunning villas to remote hiking trails. Our book club members discovered new places to explore, met memorable characters and enjoyed a kaleidoscope of Italian traditions, from the frustrating (how DOES one properly separate one's garbage?) to the delicious (charming local food festivals). Buona lettura! (Happy Reading!)"

Yes, hurray, I am finally on Amazon, and I hope available in bookshops too. I feel rather a glow when I look at the book and remember all that has happened to me this decade. I have been grateful over the years for lovely messages about my articles from readers of La Gazzetta Italiana, and they have encouraged me to keep going and produce the book. Maybe some of you may be interested to read the whole story! Grazie!

Myra Robinson is an award-winning travel writer who lives partly in north-east England, and partly in north-east Italy. She has written for many magazines and newspapers including The Guardian, The Daily Telegraph and The Independent, and is a regular contributor to Italy Magazine and La Gazzetta Italiana. She has now written a book about her adventures and misadventures in Italy.