"Here In Cerchio: Letters to an Italian Immigrant" 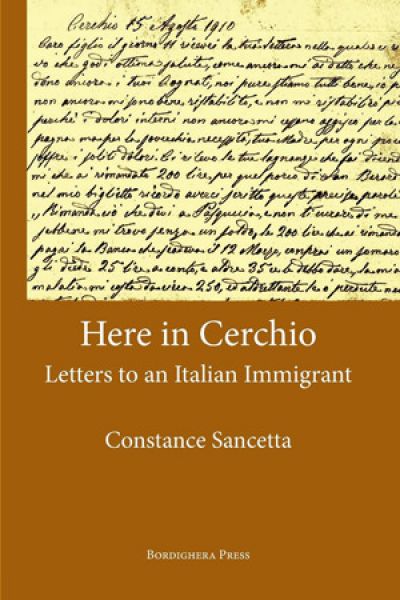 Shortly after I came to Cleveland more than a decade ago, I began volunteering at the Western Reserve Historical Society. I worked with Curator of Italian American History Pamela Dorazio Dean translating a batch of letters which had been donated by Mario Chiudioni.

After I finished the translations, I realized that they constituted an unusually complete collection of material; the 40 or so letters that covered a four-year period (1910-1913) were written by a man named Antonio Vasquenz to his son Angelo who had immigrated to Pennsylvania. So, I wrote a book about the letters, with the first half being a summary of the life of peasants during the early 20th century in Italy, and the second half being a full translation of all the letters with interpolated notes.

After a bit of searching around, I was lucky enough to contact Fred Gardaphè, who suggested contacting Bordighera Press. In 2014, they kindly agreed to publish my book, “Here in Cerchio: Letters to an Italian Immigrant.” I sold about 150 copies, mostly at an opera event and to various Italian American clubs, all of whom very kindly supported my work. All proceeds were donated to the Western Reserve Historical Society and a couple of books are available in their museum store. Since then, three things have happened, none of which I could have expected at the time.

In June 2019, I heard from Roberta Di Fabio, a woman journalist who was born in Cerchio, Italy asking for a possible interview for a journal published in Italy called Abruzzo nel Mondo. I was happy to oblige, and an interview was done by email, with my replies appearing in the journal at the end of that June.

In September 2019, Dom D’Amore, who by sheer chance had recently returned from a trip to his ancestral village, Cerchio, got in touch with me. He had been contacted by the town historian who asked if Dom could help him find the author of this book. Dom is the treasurer of IACF and was happy to pass on to me his correspondence with Sig. Fiorenzo Amiconi. The interaction was a bit slow, but in the end, thanks to the very kind assistance of Ann Sindelar, I was able to arrange for the entire set of letters to be copied and mailed to Sig. Amiconi. Ann kindly waived some of the fees, suggested various alternatives, and in general was extremely helpful every step of the way.

In fall of 2019, I heard from Alina Di Mattia, another journalist who also grew up in Cerchio, now living in Rome. She wanted to translate the entire book into Italian and have it distributed by the town mayor. She did most of the work on her own without needing to consult with me. Alina requested permission from Bordighera Press, who granted it at once. She also sent an email to Ann Sindelar in February 2020 saying that the costs would be borne by the town budget and would cost nothing to Western Reserve Historical Society. The expected publisher was to be Kirke Edizioni, with 500-1,000 copies to be given free to everyone in the village. Free copies will also be mailed to Bordighera Press and to Connie Sancetta. Now, I have just heard from her that the translation is done, the book is being published in Italy, and she hopes that she will be able to distribute it in October of this year!

None of this would have been possible without the support of Western Reserve Historical Society in many ways, especially from Pamela Dorazio Dean and Ann Sindelar. A very special thanks to Mario Chiudioni for realizing the potential value of these letters and donating them to Western Reserve Historical Society where the incredible story they tell has been able to be shared with many readers.

“Here in Cerchio: Letters to an Italian Immigrant” is available now on Amazon and other retailers.

Tweet
More in this category: « Rosabella del Molise: A Song of Love and Optimism Pope Francis: "The Catholic Church Must be Open and Welcoming" »