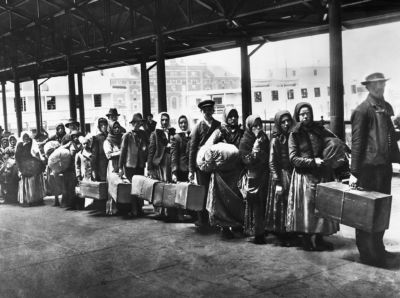 What images come to mind when someone mentions Italian immigrants to the United States? If you are like most people, myself included, you imagine steamships and the early 1900s. Typically, what I envision is the iconic scene in “The Godfather, Part II.” Vito Corleone, as a boy, is sitting in a room on Ellis Island looking out the window with the Statue of Liberty reflected in the glass. I believe most people think of such images, immigrants in rough homespun clothes waiting in lines to get through immigration. They are all visions of the east coast, New York harbor and Little Italy.

Since most Italians immigrated to the U.S. in the early 1900s during the Italian diaspora, it is only natural that we all think this way. Unfortunately, this gives the impression that we are new contributors to American society, latecomers to the party. The truth of the matter is that Italians have been part of our country's development since the discovery of the Americas through our nation's founding to modern times. Our country would not be what it is today if we were to remove these early Italian contributors from our history.

Of course, we could discuss the long list of Italian explorers of the new world beyond just Christopher Columbus, such as Sebastiano Caboto, Giovanni Da Verrazzano and Amerigo Vespucci. However, Italians did not just find the place and go home. We were part and parcel of establishing our nation and the principles upon which it is based. There are men such as Filippo Mazzei who is said to have inspired Jefferson to write "all men are created equal" in the Declaration of Independence. Another Italian-American, Philip Paca, Maryland's delegate to First Continental Congress, was a signator of that document. There are also men such as Louis Palma Di Cesnola who fought to preserve the Union during the Civil War and the first director of the Metropolitan Museum of Art.

In addition to those Italians who have been remembered by history are the millions of unsung Italians and Italian Americans who helped settle our great nation. In the latter half of the 19th century, New Orleans was an important trading port. Crops such as cotton and sugar cane were exported to Europe and South America while receiving imports such as lemons and oranges from Sicily. Unfortunately for the southern plantation owners, the exports were labor-intensive, which was a real problem after the Civil War when many slaves left the plantation. The plantation owners were more than happy to replace them with Italians, who they considered as an “In-Between” race, not quite white and not quite black. The Italian presence in New Orleans grew. By the close of the 19th century, there were more than 30,000 Italian Americans in that one area. More than laborers, they had expanded their ranks to include artisans, fisherman and merchants. These in-between people started to dominate certain markets, mainly the fish, fruit and oyster markets.

In the western part of the country, Italians were there when it was still part of Mexico. As early as the 1830s, Italians who had been working off the western shores of South America began to explore the California coast. They established fishing communities in places such as Monterey and San Pedro. Soon word made it back to Italy about the richness of California, which launched a flood of settlers.

When the Italians traveled to California, they brought the crops they knew from back home; broccoli, bell peppers, eggplant, artichokes, and lemons. Most importantly, with them came the knowledge of growing grapes and the production of wine. By 1851 there were over 100 vineyards in the Los Angeles area exporting approximately 7,200 cases of wine. By 1869 that number rose to nearly four million. Through their hard work, Italians established the Southern California agricultural industry.

Although my grandparents came to this country in the early 1900s, I am proud to be part of the Italian American community. I celebrate not only what our community has done in the past 120 years, but the total contribution we have made to the greatness of the United States of America.