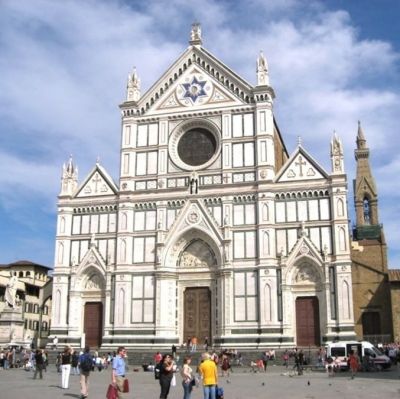 The Franciscan Basilica of Santa Croce (1294-1442) in Florence is Italy’s counterpart to Westminster Abbey in London. Inside are found a rich variety of tombs, cenotaphs, free-standing monuments, and several commemorative and memorial wall plaques dedicated to some of Italy’s (and Florence’s) most illustrious citizens.

Among this prestigious array of floor and wall tombs, monuments, and commemorative wall plaques is a freestanding marble statue of the Italian Romantic poet Ugo Foscolo (1778-1827) inaugurated in 1939 by the sculptor Antonio Berti (1904-1990) and located at the end of the south wall. Foscolo was born in Greece to a Venetian father and a Greek mother. He was educated in Venice and Padua, demonstrating an early interest and talent for literature and poetry. Foscolo was also politically active during the Napoleonic occupation of Venice. Like many young patriots, he felt betrayed by the Treaty of Campo Formio signed by the French and Austrians on October 17, 1797 which signaled the end of the Venetian Republic and its partition between the two signatories.

Foscolo spent the final 11 years of his life in exile in London. He died in 1827 and was buried at St. Nicholas Church in Chiswick. In 1871, his remains were transferred to Italy and taken to the Basilica of Santa Croce in Florence where he was reinterred to rest among the tombs of his fellow celebrated Italians.

Foscolo’s early writings spoke to a people seeking national identity while under the yoke of foreign domination. In his most famous poem, “Dei Sepolcri,” (“Of the tombs”) published in 1807, Foscolo celebrated tombs as important symbols from the past that were integral in shaping a country’s shared collective history and memory. The many tombs and monuments in Santa Croce took on a new meaning during the Risorgimento and struggle for Italian independence. No longer a place to celebrate exclusively Florentine greatness, Santa Croce was now meant to personify the greatness of a new unified Italian nation.

Antonio Canova’s “Monument to Vittorio Alfieri,” (1804-1810) is particularly important in demonstrating this new national spirit as opposed to centuries of regional campanilismo. The Alfieri monument was the first tomb in Santa Croce to be created by a non-Tuscan, Canova (who was Venetian), to honor another non-Tuscan, Alfieri (who was Piedmontese). Both Canova and Alfieri were concerned with Italianità: a new national Italian spirit.

The iconography of Canova’s tomb includes the personification of a weeping Italia mourning not only the death of the poet and playwright, but also the political misfortunes that have befallen her at the hands of the French. She wears the ancient corona turrita, a crown comprised of crenellated towers, which by the 19th century had become an aspirational symbol for the Italian nation.

In the history of Italian 19th-century Romantic poetry, places of primacy are occupied by Foscolo and his slightly younger contemporary Giacomo Leopardi (1798-1837). “Dei Sepolcri” by Foscolo looms as one of the most important and influential poems in the Italian literary canon. It was quickly translated into English and French, helping to spread Foscolo’s fame abroad and to call attention to the current political scene in Italy. The sentiments expressed in “Dei Sepolcri” combined with the funeral monuments in Santa Croce celebrating the virtues and accomplishments of Italy’s great artists, writers, poets, scientists, and composers, sought to link Italy’s past, present, and future. The cult of great men, women, and their tombs, therefore, were meant both to commemorate the past and to inspire future generations.

Foscolo’s thoughts about the tombs of famous Italians in Santa Croce are revealed in the following stanza of “Dei Sepolcri” where he refers to Santa Croce, its tombs, and the achievements of Machiavelli, Michelangelo in the Sistine Chapel, and Newton’s debt to Galileo. He writes:

The tombs of great men do spur the great souls
to noble deeds, o Pindemonte; beautiful
and saint, because of them, is to the pilgrim
the ground where they are found. I, when I saw
the monument of that great man who, annealing
the king’s scepter, removes from it the laurel
and reveals to the people how much blood,
how many tears yet drip from it; the tomb
of the one who built up a new Olympus
in Rome; and of the one who saw more worlds
rotating in the eternal sky, the Sun
irradiating motionless, whereby
he boldly paved the way across the space
for the English man who later flied much further.

Ugo Foscolo’s masterpiece, “Dei Sepolcri,” is a complex and challenging poem. It is filled with ancient, archaic and classical references and a syntax that may be difficult for both modern Italian and American readers to appreciate. For an English-speaking reader, much depends on the quality and fluency of the translation. “Dei Sepolcri’s” publication in the early 19th century, during the first stirrings of Italy’s quest for national unity and self-rule, however, reminded citizens from all regions of the peninsula of the greatness of their shared history, experience and memory. In so doing, it is a powerful reminder of the debt owed to all those who come before us.

Tweet
More in this category: « The Italian Immigrant Artistic and Artisan Heritage of the Assisi Textiles »