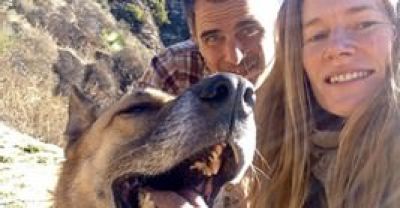 In large Italian cities you may notice dogs with owners in tow, often breeds that may be considered “designer” or “pure bread.” Rarely, however, do you see stray dogs roaming.

In 2010, Fiona Cole and Carlo Cesario rescued their dog, Dino Fortunato, in Calabria in southern Italy, and brought him home to California. Rescuing Dino prompted Fiona and Carlo to question how other countries manage animal rescue and shelters compared to the U.S.

Italy banned euthanasia in 2009 and shelters are paid per day per dog to house dogs. This humanitarian policy perhaps has contributed to the packed kennels where dogs are kept in cages, sometimes for the rest of their lives.

Dogs fall into groups: strays, previously owned (abandoned or surrendered to a shelter) and free-ranging dogs. Each group lives differently and has specific needs. Free dogs, considered packs and possibly dangerous in the U.S., live in a group and are self-sufficient. Free dogs do not thrive in a shelter where they are confined and do not mix well with other groups.

Carlo and Fiona’s mission to bring the story of Italy’s stray dog population to life brought them back to Italy for interviews with four dedicated dog advocates: author and dog trainer Luca Spennacchio, veterinarian Dhorotea Fritz’s animal welfare organization Lega Pro Animale, Michele Minunno, an author who educates shelter workers to improving the dogs’ experiences, and the managers of the Ritugio Fata rescue in Calabria.

The interviews are more than a deep dive into how Italy manages the endless dog population. They include insightful ideas the speakers shared on the psychology of how humans think of dogs and what the dogs experience, “how they fit into our lives and we in theirs.”

The interviews enlighten us on how locals believe they are saving free dogs by taking them to kennels, when they often are committing them to a life in a cage. They open our eyes to new ways of seeing the homeless dog population and how to approach and change the system while understanding what a dog needs to thrive. Increasing neutering and spaying to manage future populations are other topics shared by the experts.

The four-part YouTube series introduces only four of the many locals willing to stand up and take on the job of improving the lives of dogs.

You can find the documentary series “Mondo Stray” on the Filo Films YouTube channel at www.youtube.com/c/FiloFilmsTV. “Mondo Stray” was written, edited, filmed, and produced by documentary filmmaker and freelance content creator Fiona Cole and Carlo Cesario.

View the embedded image gallery online at:
https://www.lagazzettaitaliana.com/history-culture/9733-mondo-stray#sigProId3f9c6392df
Tweet
More in this category: « The Pandemic Was No Match for Garlic The Italian Immigrant »