Words and Images: The Inspiration of Dante in 19th Century Art 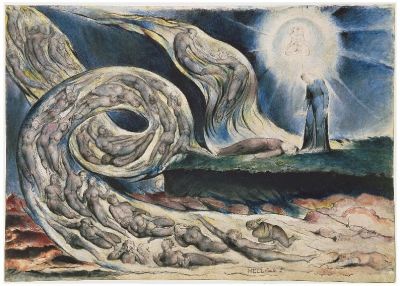 This year we commemorate the 700th anniversary of the death of the Florentine poet Dante Alighieri (1265-1321). Dante ranks among the greatest poets in the western literary tradition that includes Homer, Virgil, Chaucer, Shakespeare, and Milton.

Visual artists engaging the written words of Dante (or any poet) introduce us to the rich and complex history of literary and visual interactions in art. What is the relationship of words and images through time?  How do they communicate to us? How do we process verbal and visual information? How does the history of language relate to the history of art? What happens when text is translated into images? These questions have long fascinated artists, writers, philosophers, aestheticians, linguists, and philologists. The tension between the literary and the visual has also been a weapon for political revolution, religious reform, social change, and cultural provocation.

The first and most obvious interaction of words and images is the reliance by artists throughout history upon well-known literary sources including the Bible, Greek and Roman mythology, tragedy and philosophy, the writings of Dante, Boccaccio, Chaucer, and later influential writings by Ludovico Ariosto, Torquato Tasso, Miguel de Cervantes and, finally, William Shakespeare and John Milton. In all cases, the written word acts as the catalyst for visual imagery whether in painting, sculpture, graphic art, or book illustration.

No poet or writer’s work was more influential as the source for visual artists throughout history than the power and originality of Dante’s poetry, and nowhere more so than in the 19th century. Scenes inspired by the writings of Dante, set the stage for an explosion of imagery in the works of 19th-century visual artists.

Nineteenth-century painters and sculptors like William Blake, Henry Fuseli, Jean-Auguste-Dominique Ingres, Eugène Delacroix, Dante Gabriel Rossetti, John Everett Millais, Jean-Baptiste Carpeaux, Gustave Doré, Odilon Redon, and Auguste Rodin, considered the written scenes described by Dante to be autonomous creations, requiring autonomous translations into art. A painting, sculpture or print was not to be a mere illustration, but a unique reinterpretation of the text forged from the artist’s personal imagination. One must remember that throughout the history of art, artists like Michelangelo, Blake, Rossetti, as well as Victor Hugo, Wyndham Lewis, Paul Klee, Joan Miró, and many members of the Futurist, Dada and Surrealist movements were themselves poets.

Within Dante’s entire oeuvre, the major source of inspiration for visual artists was “The Divine Comedy.” Within the three parts of the “Comedia” (Inferno, Purgatorio, Paradiso) the favored section was the Inferno. Amidst the sin and despair in the Inferno, it is in the fifth canto located in the Second Circle of Hell that Dante encounters the lustful, those who gave themselves over to sins of the flesh while on earth. Their punishment now is to be forever buffeted and swept along by the force of their carnal lust.

One couple among the lustful interests Dante and he is allowed to call to them and to question them. Here we are introduced to Paolo and Francesca, whose illicit love affair on Earth forever dooms them to the eternal storms and winds of their unchecked passions. After hearing their sad and mournful tale, Dante is so overcome with emotion that he, for the first time in the “Comedy,” faints.

Almost every 19th-century painter or sculptor who found inspiration in Dante’s “Divine Comedy” chose this episode from Canto V of the Inferno to represent including, among others, William Blake (1757-1827), Auguste Rodin (1840-1917) and Dante Gabriel Rossetti (1828-1882).

For the Romantic imagination of 19th-century artists, Dante’s punishment of sins of the flesh struck a familiar chord and could be interpreted either as romance or tragedy. Dante’s swoon at the end of the episode has been interpreted in many ways by literary scholars. On the one hand, Dante appears to feel tenderness and pity for the plight of the couple. Writing about the Paolo and Francesca story and the “Comedy” in general, the Dante scholar Renato Poggioli concluded that: “The artistic achievement lies in the fact that the poem reconciles within itself Dante the witness of the wretched misery of man, and Dante the beholder of the awful majesty of God.”