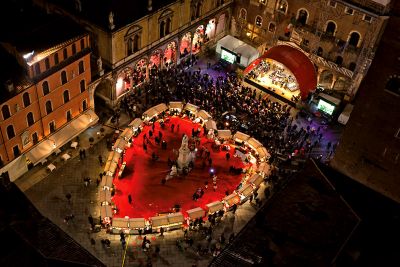 They say Italians did not invent love, we just perfected it. We can, however, take credit for inventing Valentine’s Day. Now, I will admit although the cynical assertion that the holiday was started by chocolatiers, florists and greeting card companies to help bump sales during the post-holiday slump has some appeal, it is not correct. If you are one of these naysayers that dreads having to buy flowers and find a coveted seat at an overbooked restaurant every mid-February, blame the Italians.

The true origins date back to Roman times, and some suggest even before then. Of course, being well before Christianity, there was no Saint Valentine to inspire the celebration. This was a pagan festival, with all the trappings of a pagan holiday. There were no cute little cherubs with arrows, boxes of chocolate or even romantic candle-lit dinners. Rather, this was a bawdy Roman fertility rite where young men raced naked through Rome whipping women with goat skins. Many women happily bared their flesh for the whipping believing that it increased fertility. There was also a lottery in which young men would draw women’s names so that they could “hook-up” (I believe that is what it is called nowadays) for the length of the festival.

The Lupercalia was a popular festival surviving until 494 BCE, well after the Christianization of the Roman Empire. In that year, Pope Gelasius wrote a letter condemning Christian participation in the celebration. The pope eliminated the pagan holiday, declaring February 14 a day to remember the martyred Saint Valentine. The saint, according to the most common legend, was executed by the Roman Emperor Claudius II for providing aid to persecuted Christians and secretly marrying Christians. The latter serving as a tie into the holiday as a day for lovers. As far as the giving of cards, Valentine is reported to have restored the sight of his jailor’s daughter. The night before his execution, Valentine is said to have written a note to the girl signed “from your Valentine.”

Now there is always going to be one group or another that wants to spoil the party. Some groups shun Halloween because of all the devils and witches while other groups tell us that Christmas trees, as well as the celebration of Christmas itself, are things to be avoided because of their pagan origins. These same party-poopers have a problem with Valentine’s day for similar reasons. Admittedly, there are several features of the holiday that do seem to originate with the Lupercalia. The Valentine’s Day colors of red and white, for example, are said to come from the Lupercalia sacrifices with red representing the blood of the animals and white the milk used to wipe the blood clean as well as the representation of procreation, new life.

At the other end of the spectrum are those that say the two are unrelated. They just happen to fall on the same date, after all, there are only 365 days in a year. If, as they say, Valentine’s Day did not evolve from the Lupercalia, I believe that it is more than a chance. Like Valentine’s Day, it was probably a great excuse to have one heck of a party in the middle of a boring winter.

View the embedded image gallery online at:
https://www.lagazzettaitaliana.com/history-culture/9638-italian-love#sigProIdec8dc0c57c
Tweet
More in this category: « Preserving Italian Heritage in America Words and Images: The Inspiration of Dante in 19th Century Art »