The Faglia of Oratino: A Popular Christmas Eve Tradition 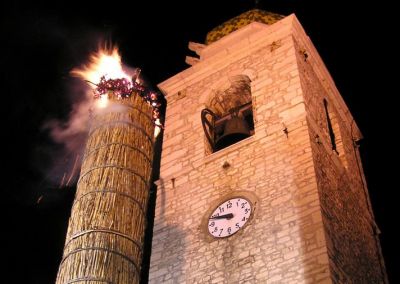 The ritual of La Faglia is a holiday event celebrated annually in Oratino, a small town holding the title of “uno dei borghi più belli d’Italia” (one of the most beautiful villages of Italy). Oratino is a delightful and mountainous village of about 1,600 inhabitants located in the province of Campobasso in the Molise region. At the center of the festivity is a gigantic torch composed of 40-foot sugar canes that weigh around 3,000 pounds. Its preparation involves the physical strength as well as the keen dedication employed, year after year, by the young men in town. The first phase of this project begins with the gathering of reeds around the countryside surrounding the village at the end of the harvest season. The material is stored in a designated area where it is shaved, clipped and bundled in a sheaf held together by big rings made from elm branches.

On Christmas Eve, at about 3 p.m., 50 young men begin transporting the large torch, shoulder to shoulder. The procession starts at the entrance of the village and continues through the serpentine streets of the town. During the journey, the volunteers stop frequently to get a break from carrying the heavy load. The parade continues with villagers enjoying the spectacle going by until the square of the Santa Maria Assunta Church located in the historic part of town. By 7 p.m., the torch is finally positioned upright in front of the belltower and blessed by the local priest. It is then lit and left burning all night long, the gigantic column is fuming ashes by the morning.

The celebration of La Faglia has been around for centuries. Its significance is seemingly based on several different theories. One of them links it to the Pagan rituals celebrated in honor of the fire that welcomes the arrival of the winter solstice. Another supposition draws the attention to the light of the burning fire that enlightens the road for the coming of Baby Jesus. Another hypothesis, which seems to be the most practical and plausible one, points to an ancient method served to alert the townspeople that the holiday celebration was about to begin, in times when other means of communications were not yet available.

In addition to those who dedicate their time and strength to the construction and transportation of this holiday torch, there are other protagonists who are worth mentioning. One is the “Capo Faglia,” a sort of captain responsible for tasks such as giving the go-ahead before the bundle is transported as well as guiding the carriers through the narrow streets of the town. Another relevant character is the person who is chosen to stand atop the big structure. This is usually a villager chosen among others for special reasons, such as the oldest person in town or the immigrant returning for the occasion many years after. Other participants of this popular practice are the town musicians who accompany the procession while performing local and regional tunes to further liven up the experience for all those involved. A special recognition also goes to the young children, who in the most recent years, have started building their own bundle of reeds called “La faglia dei piccoli” (the children’s faglia) or faglietta (little faglia). The latter is an initiative aimed at instilling the passion in younger generations so that they, in turn, will carry on the popular celebration initiated by their ancestors.

The ritual of La Faglia truly is one of the most symbolic and anticipated festivities in the small town of Oratino. It adds more character and meaning to the most magical time of the year for a tiny place on earth. It is a secular tradition renewed each year, which allows the memory and the importance of the past to be alive in the present. It is a folklore festivity representing an integral part of the identity of a little village, where people of all ages have become accustomed to reciting their popular motto “A Oratino, Natale non è Natale senza La Faglia.” In Oratino, Christmas is not Christmas without “La Faglia.” Buon Natale!

View the embedded image gallery online at:
https://www.lagazzettaitaliana.com/history-culture/9598-the-faglia-of-oratino-a-popular-christmas-eve-tradition#sigProId4c619eae0e
Tweet
More in this category: « An Italian American Christmas In Sardinia a Chanukah Dreidel Hides in Plain Sight »